White fringetree is a shrub or small tree that is a member of the olive family (Oleaceae).  Its alternative common names include American fringe tree, old man’s beard and sweetheart tree ¹.  Fringetree is frequently a multi-stemmed shrub attaining heights of 20 feet, however in the wild it may be single stemmed and reach 35 feet ².  Its opposite, deciduous leaves are oval with acute tips and may be 3 to 8 inches long and 1 to 3 inches wide ¹.    Trees are either male or female (dioecious), but some have both types of flowers ¹.  The fragarant flowers appear in late April or May and  are showy with long, white or cream colored petals ¹.  Fruits are blue-black berries ². 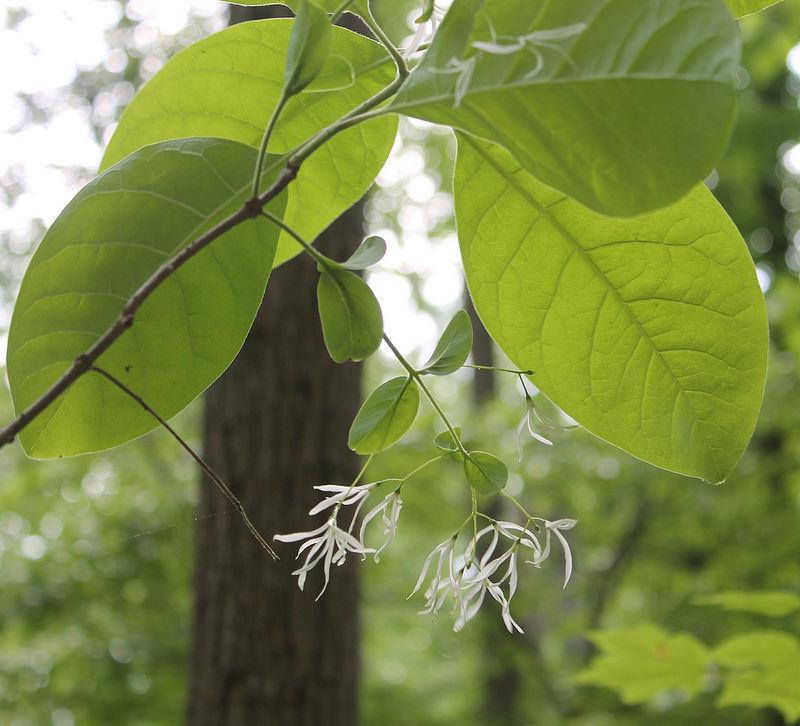 White fringetree is distributed in the eastern US from New Jersey to northern Florida and west to eastern Texas and Arkansas.  In Maryland it is most common in the eastern parts of the state, although it can be found throughout ³.

White fringetree is host to several sphinx moth species including the Giant Ash Sphinx ³.  Fruits are consumed by birds and small mammals ¹. Yellow-bellied Sapsuckers drill holes for the sugary sap and to attract insects which they consume.

White fringetree is widely planted for its showy, fragrant flowers ².

White fringetree is susceptible to borers, and may be attacked by the Emerald Ash Borer ¹.  In some cases die-back occurs due to the use by sapsuckers.