Bald cypress (cypress family, Cupressaceae) is a deciduous conifer, losing its needles in winter¹.  They can grow up 120 feet tall and have a trunk 3-6 feet in diameter².  When grown in flooded conditions, the trunk is flared at the base¹.  The bark is thin, fibrous and shedding with a cinnamon color4.  In habitats prone to flooding, the roots produce “knees” (pneumatophores) that reach the highest level of flooding2,3.  These may assist in getting oxygen to the roots or to stabilize the tree3,4.  The needles are arranged alternately on the branch, are flat and are about one inch long.  They are a vibrant green and turn to a reddish-brown in the fall.  Their cones are spherical and house triangular seeds that are eaten by wildlife³.  Seeds are spread by floodwaters13. 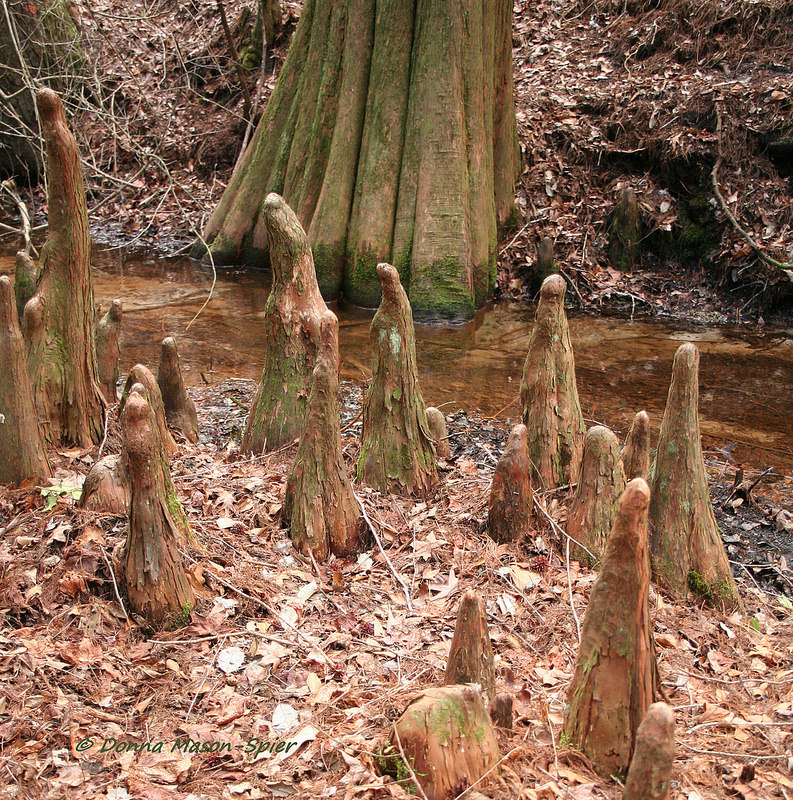 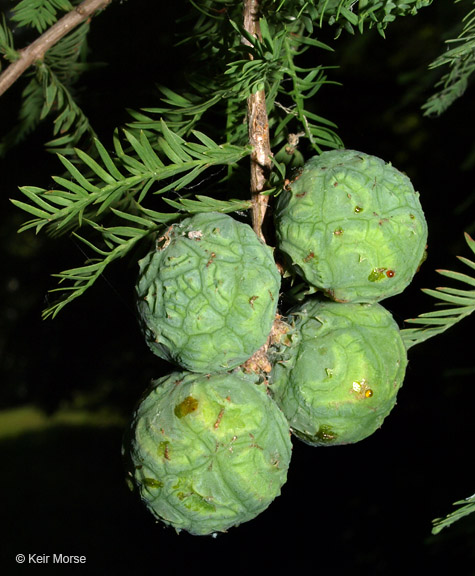 This tree is native to the Atlantic coastal plain from southern Delaware to Florida, across the Gulf Coast Plain and up the Mississippi Valley drainage basin to southern Illinois5,6,13.  It is usually found in wet soil or near a river or other water source often standing in water.  In Maryland, it can be found at Battle Creek, along the Pocomoke River7 and in other locations along streams and rivers on the western and eastern shore of the Chesapeake Bay12. 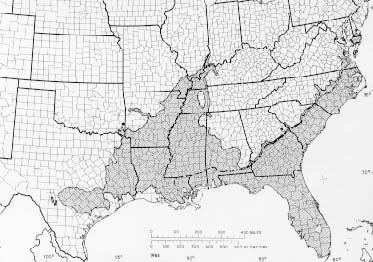 Just about every part of this tree supports wildlife in one way or another. Various animals will use hollowed portions of the tree. Catfish will use submerged hollow logs as places to lay their eggs and wood ducks will use hollowed portions of the trunk to nest. Additionally, many birds utilize the canopy of these trees to nest³.   Bald Eagles use the high treetops as nesting grounds15.  Not only does it provide shelter to animals and their offspring, the bald cypress’s seeds are also food for animals like the wood duck, turkeys, and squirrels3,5.   These trees are also very important in preventing erosion since they are usually found in wet soil³.

The heartwood of this tree is rot-resistant, which makes its wood great for woodworking and construction. At one point, it was harvested so that its heartwood could be used to make things such as caskets, boats, bridges, docks, and fence posts3,6,8. However, these trees are not harvested as often now as they are slow growing and not as abundant as they once were³.

The bald cypress is a fairly hardy tree; but it is sometimes susceptible to diseases like twig blight and pests like gall mites and spider mites¹. Chlorosis (loss of chlorophyll9) can also occur if the soil that the tree is rooted in is too alkaline¹.  Not only are they threatened by natural causes, they are also threated by humans through logging.  As mentioned before, they are valued for their rot resistant heartwood.  Demand for them has caused overlogging that has contributed lands eroding in Louisiana’s coast10.  They are susceptible to salt intrusion by coastal flooding3,13.

Contributed by B. Young and A. Wilson