American holly (holly family, Aquifoliaceae) is an evergreen tree with broad leaves and brilliant red, ⅓ inch diameter² berries that ripen in October and last into winter³.  It can grow to be up to 40-50 feet tall and 18-40 feet wide³.  Its white flowers are dioecious (male flowers and female flowers grow on separate plants),²  and mature in late spring4.  Its leaves are thick, tough, simple, alternate4, 2-4 inches long²,  spiny and dark green to yellowish-green³.  Its bark is grayish-white and sometimes white4.   American holly trees grow in a pyramidal shape².  American holly berries are toxic to cats, dogs, horses, and humans, and can cause nausea, vomiting, diarrhea, and depression³. 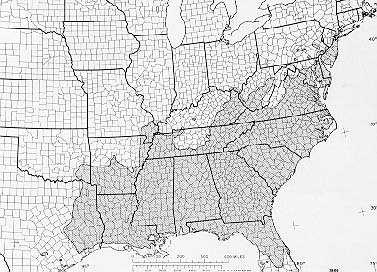 Many birds (over 18 species, including wild turkeys and mourning doves, eat  American holly berries. Squirrels and other small animals, and occasionally cattle and deer also consume the plant6. The endangered red-cockaded woodpecker makes its nest in American holly trees.  Planting American holly can help to restore forests damaged by ocean spray6 .  It sometimes competes with pines and hardwoods for sunlight, water, and nutrients6.  American holly provides nectar to butterflies and other insects during the spring/summer and shelter for animals during the winter4.

The leaf miner and scale insects are the American holly’s biggest predators, but it’s also afflicted by many other insects and conditions, such as powdery mildew, beetles, and leaf scorch³. Aggressive harvesting of holly berries by humans, flooding4  and fire are also threats to the American holly6.