American wild plum  or wild plum is in  the rose family (Rosaceae).  It is small deciduous tree with only a single trunk and grows to 15-25 feet tall and 15 to 25 feet wide ³.  Spines can sometimes be found on the branches of the tree ². These leaves are simple leaves with alternative arrangement.  Wild plum leaves are ovate, between 2 to 5 inches long, 0.75 to 2 inches wide, long pointed and have serrate margins ².   Wild plums have white flowers that appear in groups of 2 to 5. Each flower is between 0.75 to 1.5 inches . They first bloom is between March to May prior to leaf emergence ². When the flowers bloom, they have an unpleasant smell ³.  Red and yellow fruit grow to around 0.88 to 1.25 inches and ripen in August to September ¹. 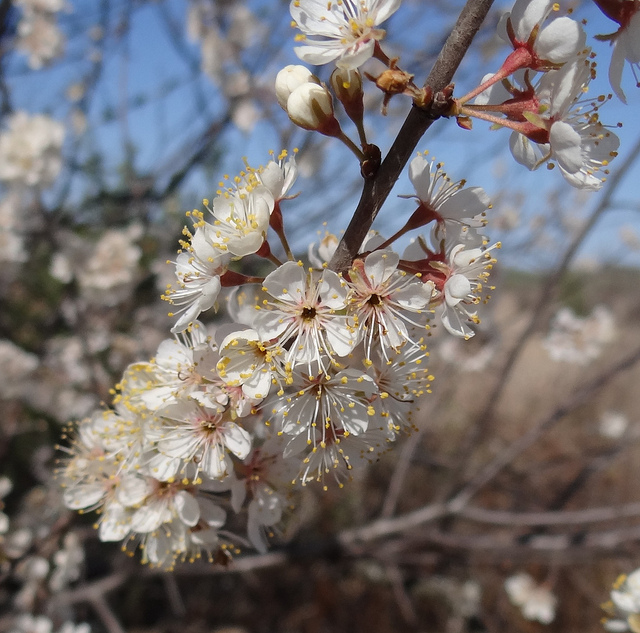 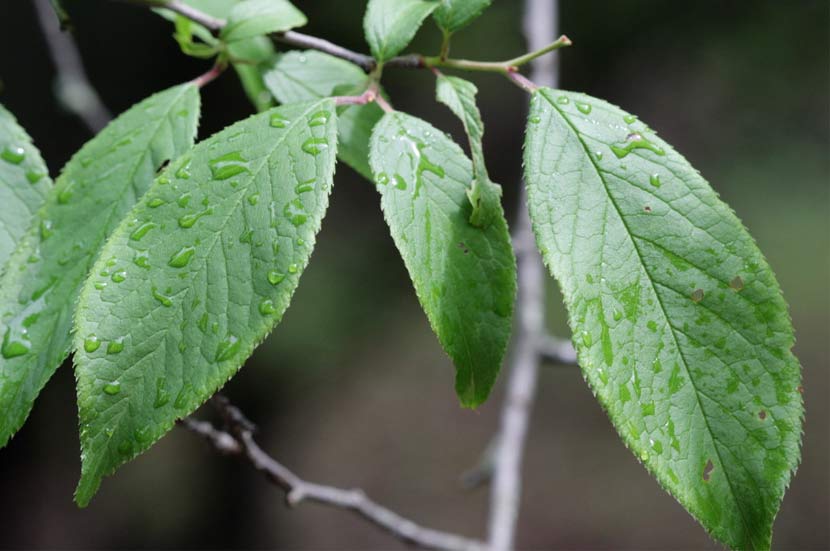 American wild plum is native to North America from Massachusetts to Montana, mostly south of the Great Lakes, in uplands south to Florida. They can be found in prairies, woodlands, pastures, and along roadsides and riverbanks7.  American wild plums can survive in a wide variety of soils but prefers well-drained soils 8. For best growth, a well-drained soil and easy access sunlight are needed 8. This will allow for easy fruit growth. However, the American wild plum can survive in shady regions. They are also very tolerable to colder climates ². American wild plum is an important species for various wildlife. The thorny, suckering growth forms a grove that is valuable for birds. In this grove birds can make their nests and roost. The twigs and foliage supply whitetail and mule deer with browse to feed on 7. Squirrel, wild turkey, black bear, and foxes are a few other animals that use the American plum as a food source. The dense thickets also supply shelter for smaller mammals such as rabbits and white tail deer 9.

The American plum has minor impact on the economy. The plums have a sour outer skin with a sweet flesh inside. This makes the fruits perfect for creating jams, jellies, preserves and pies ¹.

American wild plums are threatened by the Eastern Tent Caterpillar worms, Malacosoma americanum. These caterpillars will infest the prunus species. This infestation will hinder the plant from growing flowers and fruits. If the infestation is severe, it can stunt plant growth and cause defoliation ².  Plum curculio can also affect the fruit. Plum curculio is a beetle that can be found in north America east of the Rocky Mountains. The adult beetles will feed on the buds and flowers of the tree. Once fruits start top grow it will lay its eggs inside of the fruits. The larvae will hatch in about five days, and they eat to the center of the fruit where they will stay for two weeks. After this they will eat their way out and then the process restarts in the next season 10.  Brown rot is a fungal disease that affects the tree. Brown rot is the most serious disease for plum trees. This disease destroys the shoots, twigs, and fruit. The disease quickly spreads and makes all the fruits affected inedible 5.