The staghorn sumac is a member of the sumac or cashew family (Anacardiaceae) that contains about 870 species ¹.  Members of the Anacardiaceae are known to have resin ducts within their bark that produce resin, glue and gums ¹.  The staghorn sumac is no exception to this as it produces a white resin within its ducts ².  Staghorn sumac is a deciduous tree that can grow to a height of 30 to 40 feet with a trunk diameter up to 12 inches and lives about 50-100 years 2,4.   The current year’s stems and fruits are distinctly red hairy 4. Wood of staghorn sumac is yellow or olive green  with its sapwood taking a gray coloration ³.  Staghorn sumac’s branches contain leaves that alternate and are pinnately compound, being 6-16 inches long and 4-7 inches wide 4. Each leaf contains between 11-31 leaflets which are green on the upper surface and pale on the lower surface 4.   At the end of each branch is a cluster of yellow-green flowers about 8 inches long and 2-4 inches across 4. Within each cluster can be hundreds to thousands of individual 5-petaled flowers that are about 1/8 inches wide 4. The staghorn sumac is dioecious, so the flowers will be either male or female, but only one gender of flower is present on any given tree so the tree is unable to self-pollinate, needing a tree with the opposite gender of flowers to do so 5.  The staghorn sumac’s fruit are fuzzy and red, being 1-seeded drupes that are 1/6 inches across 4. 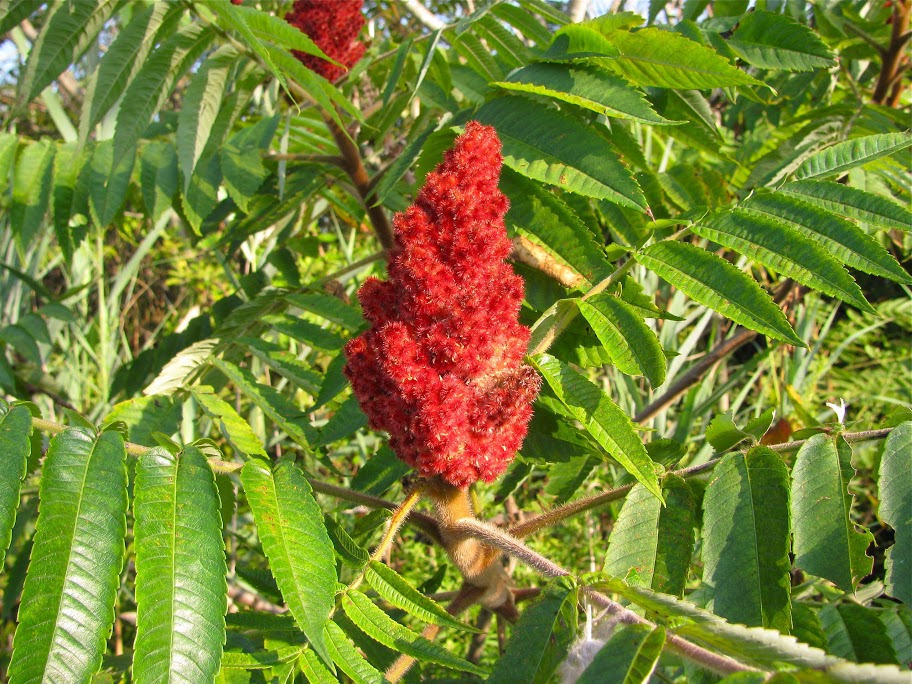 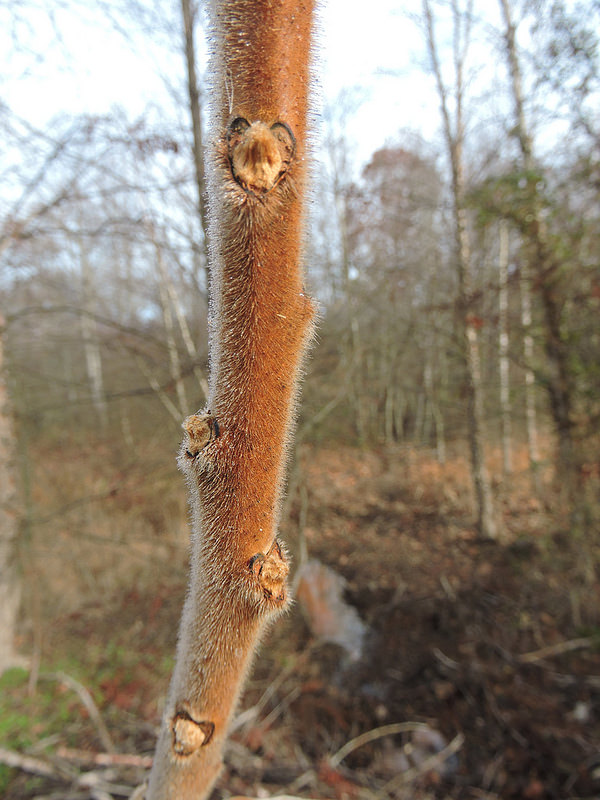 Staghorn sumacs are found in the upper midwest and northeastern parts of the United States as well as southeastern Canada 7. They are shade intolerant 7 and are found growing in both nutrient rich and poor soil. They can be found alongside swamps, streams, roads and the edges of woods 5.  It may be found at elevations up to 5,000 feet 11.  Staghorn sumac grows in hardiness zones between 4-8 5.   In Maryland staghorn sumac grows in every county with the exception of Charles, Wicomico and Worcester counties 8.

Due to its size, the lumber from the staghorn sumac isn’t used commercially. Hobbyists and carvers may use smaller pieces of its wood though ³. The fruit on the staghorn sumac is sour and can be baked into pies, or if soaked can also be made into a lemonade 5. Different types of pigments can be processed from the tree.  In the autumn the leaves produce tannin, about half of which can be collected to create a brown dye 5. The inner bark and central pith can produce an orange dye, black ink can be made from boiling the leaves and the fruit and an oil can be extracted from the seeds which is used in candle making 5. Staghorn sumac was originally used by several Native American tribes for medical purposes including treating diarrhea, fevers and uterine prolapse 5.  Small pieces of wood were eaten to help with milk flow for nursing mothers, the roots are astringent, blood purifiers, diuretics and emetics and infusions helped treat venereal diseases and boils 5. The leaves are astringent and helped to treat asthma, diarrhea and stomatotis. The fruit and flowers could be prepared to help with stomach pains, and sore throats and the sap was used to help treat warts, although it could also cause skin irritations and rashes 5. Many of these treatments aren’t used today however as the leaves and stem of the staghorn sumac are slightly toxic ³.

Staghorn sumac can resist damage from most diseases and insects, but can be susceptible  to aphids, black scale and psyllids and accompanying fungi 6.  The population trend overall though for the staghorn sumac is stable and it is marked in the category of “least concern” on the IUCN Red List of Threatened Species as of 2018 11. Its above ground shoots are killed by fire, but it may res-route from underground 7.