Allegheny serviceberry (family Rosaceae) is a deciduous tree that can reach heights of 25 feet, and diameters of 25 feet in their native habitats¹.  It is a narrow round, multi-stemmed, irregular shape with fragrant white flowers on its fine branches making it a popular plant used in landscaping¹.  The bark is smooth, silver-gray, with vertical stripes down it. The leaves are oval shaped, 2-4 inches in length, simple, alternate, and emerge red, before turning green/blue². During the fall, colors change and vary between colors from yellow to red. Loose clusters of white fragrant flowers emerge in April to June7 before the leaves followed by berries in the summer that turn from red to purple and are edible. The berries are the seeds of the tree and are round, small, and roughly 3/8 of an inch in diameter1,2. 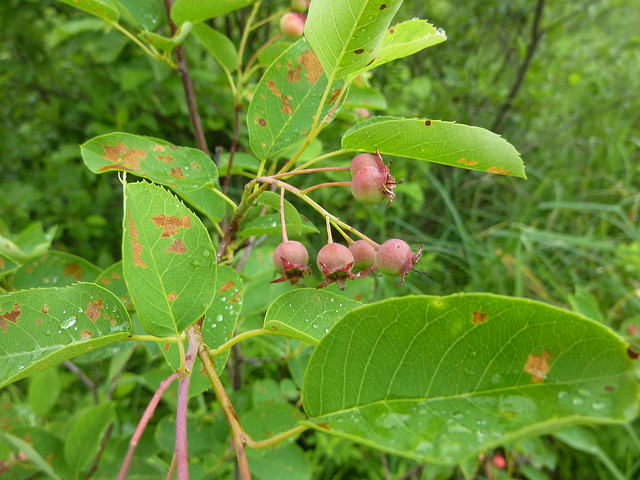 Allegheny serviceberries are native to Eastern North America, and Eastern Canada4.  Its native habitat is cool woods, in a slightly acidic soil that is moist/slightly dry, however they can tolerate most soil types as long as they aren’t in drought³. They prefer well-drained loams as well as shaded or lightly shaded areas. These trees do not tolerate full sunlight well5.   In Maryland the Allegheny serviceberry can be found in Garrett, Montgomery, Howard, Baltimore, and Carrol 6. 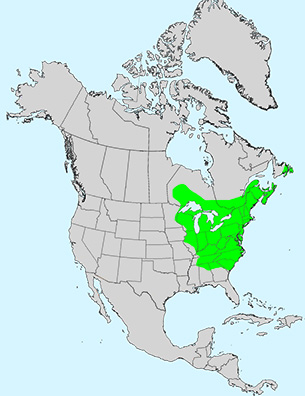 Allegheny serviceberry is host to larvae of Red-Spotted Purple and Viceroy butterflies.  Flower nectar is used by butterflies and bees.  Fruits are consumed by songbirds, ruffed grouse, chipmunks, squirrels and large mammals3,8.

Due to the quick growing ability of the Allegheny serviceberry as well as the beauty of its flowers, many landscapers and homeowners use this tree in their yards. Its berries are also good for making jams, syrups, juices, pies, and sweatbreads9.

Cambium miners can be a cause of concern, however, rarely are they ever damaging to the tree itself. Borers attack the trees as well, but healthy trees rarely suffer from this, so fertilization as well as watering when needed is used to prevent borers. Spider mites may infest the tree. These will cause leaves to die, and these can be prevented by using horticultural oil sprays during the spring time. Allegheny serviceberries can also suffer from diseases such as witches broom (black mildew), leaf blight, powdery mildews, and fruit rotting. Witches broom isn’t much cause for concern as they can be pruned off without using chemicals. Leaf blight usually needs to be controlled as it will cause leaves to die, bark to shrivel, gum to ooze from the infected area. Diseased branches can be pruned out and fertilization can increase resistance. Mildew also does not need any controls as it is not a serious threat to the plant10.