Smooth sumac is a deciduous shrub-like tree from the cashew family (Anacardiaceae) ².  Typically, it ranges from 10 to 20 feet tall, but mostly under 14 feet.  It has short, crooked reddish trunks that tend to lean.  Stems of the first year’s growth are smooth and waxy, hence its common name, which distinguishes it from the hairy staghorn sumac.  Leaves are alternate and pinnately compound 16 – 24 inches long  with 13 to 31 leaflets 1,2. The leaflets are rounded at the base and come to a point at the tip and have sharp-toothed edges. Leaves are dark green on the top and pale on the bottom and become very colorful in the fall months ³. Compact pyramid-like clusters of flowers bloom in females during June and July.  Male and female flowers are on separate plants (dioecious) ².  Flowers develop  red drupes that are small round hairy fruits normally about ¼ in in diameter.  Fruits are normally found on mature plants that are 3 to 4 years old ².  Each drupe contains a single seed, seeds are hard, gray-brown, pointy and egg-shaped, about 100-700 drupes per cluster ². The drupe clusters persist throughout winter 1,2. 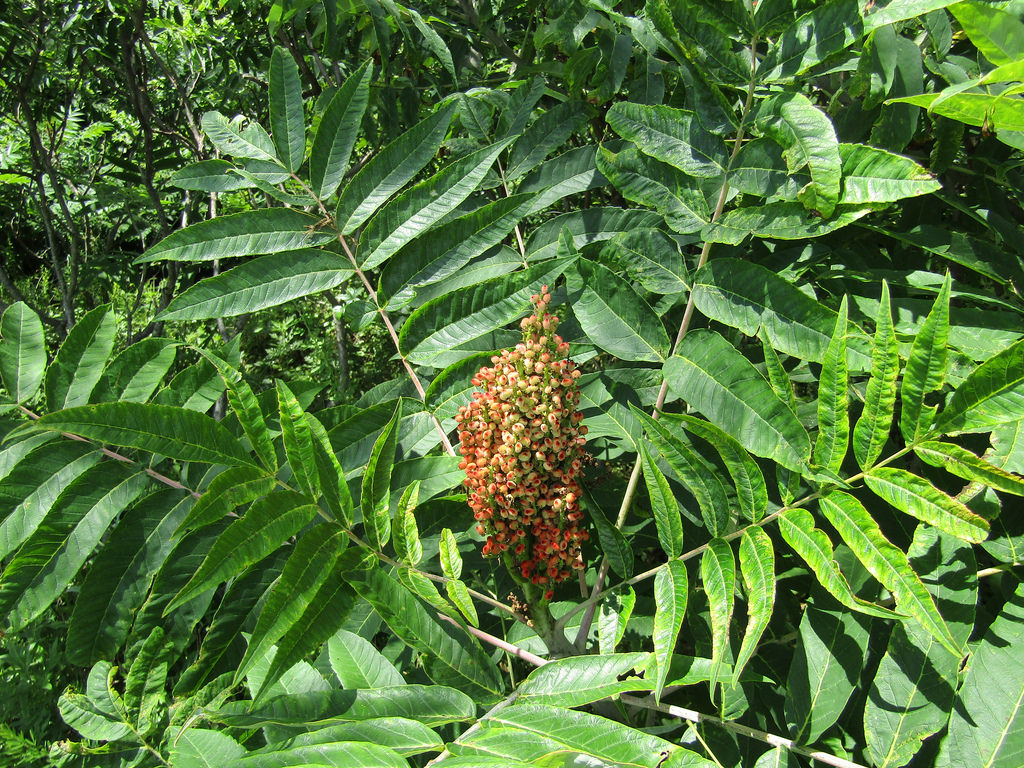 Smooth sumac  is widely throughout the US and some of Canada and Mexico ¹, but not in California ³.  Because they are extremely drought resistant, they will grow in dry waste areas, such as slopes where other species struggle ¹.  They are most commonly found in open fields and roadsides, fence rows, railroad rights-of-way, and burned areas, on sandy or gravelly soil and can tolerate slightly acidic soil ².  They are considered an early successional species as they are fast growing, shade intolerant, generally pest and disease-free ².  Smooth sumac is found throughout Maryland except three eastern counties 8.

Smooth sumac plants provide shade and coverage for other plants and animals. The Ring-necked pheasant, bobwhite quail, wild turkey, and about 300 species of songbirds include sumac fruit in their diet ².  It is most commonly used as emergency food during the winter because the drupes persist through the cold months for animals when other food is scarce ³.  The fruit is high in potassium and calcium, but low in energy and protein 4. It is a host for the Red-Banded Hairstreak butterfly and provides nectar for pollinators 6.  Smooth sumac is also a recommended plant for “living” snow fences as a habitat improvement effort and in drought heavy areas as landscaping ³.

Plant tissue of the smooth sumac indicates the presence of antifungal and antibacterial compounds. We use the colonizing nature and the tendency of animals using it as an emergency source to hunters and conservationists use it to deplete game ranges ². The main uses of the plant come from native American culture as a remedy or food. Native Americans used the raw young sprouts, eaten as salad the sour fruit can be chewed to quench thirst or prepared as a drink similar to lemonade or a tea ³. Its boiled fruit is used as a remedy for painful menstruation and blood diarrhea (diuretic) and the roots and berries steeped to make wash for sores ¹.  They also used it to make yellow die and sometimes it is mixed with tobacco ¹.  Because of its  bright red fall foliage it is sometimes used as an ornamental planting ³.

There are no serious threats to this potentially invasive and widespread species 6. It is resistant to drought and recovers from fire 3,6.