Mockernut hickory (walnut family, Juglandaceae1), is also known as white hickory2.  It stands approximately 50-60 feet tall at maturity, but can reach 100 feet, and the trunk spans 1-2 feet in diameter2. The leaves are alternate and pinnately compound3.  The leaves grow 6-12 inches long along with 5-9 leaflets that grow about 8 inches long3.  The bark is gray color with ridges that form diamond-like patterns3.  Mockernut is monoecious, meaning it produces male and female flowers on the same plant.  The species’, yellow-green male flowers are in catkins, bloom from April to May, and are wind pollinated4.  The female flowers are much smaller and reside at the tip of the twigs2. The mockernut produces fruit, from September to October.  The fruit is a pear-shaped, thick-shelled (5-6 mm) nut containing a sweet kernel3.  The hull splits apart at maturity into four thick (4 mm) sections2. 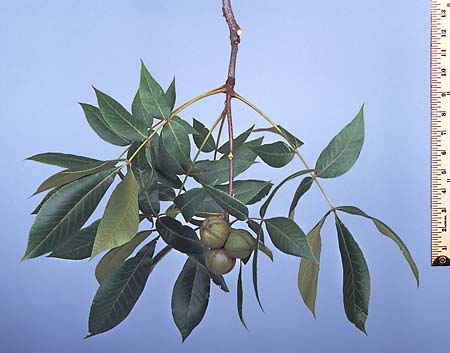 Mockernut hickories occur throughout the eastern United States, in Maine, Michigan, Illinois, Nebraska, Florida, and Texas3.  It is found in deciduous hardwood forests on dry upland slopes on ridges and hillsides2.  However, the tree is in almost all the states due to human interference and planting3.  In Maryland, these tress reside all across   the state4. 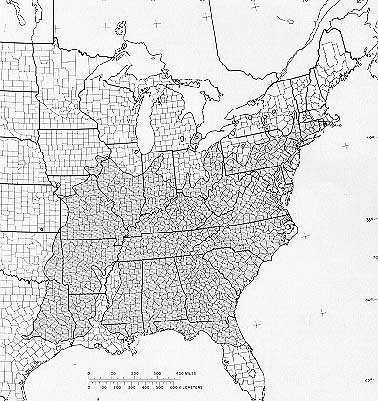 The nuts of the mockernut hickory supply sustenance for a plethora of wildlife including, white-tailed deer, foxes, squirrels, rabbits, beavers, white-footed mice, ducks, quails, and turkeys2.  In addition, white-tailed deer browse on its foliage and twigs2.

Mockernut hickory wood is especially hard, tough, stiff, and strong, which makes it perfect for manufacturing tool handles, dowels, gymnasium equipment, poles, and furniture1,2.  Although it is used for all these things, approximately 80% of mockernut wood is used to manufacture tool handles2.  The wood is also used for lumber, pulpwood, charcoal, fuelwood, and basketry1,2.

Stressed mockernut hickory trees are vulnerable to the hickory bark beetle2.  The beetle burrows into twigs and small branches5.  These beetles can kill weak trees, and even kill strong trees during a mass infestation6.  This happens because the beetle tunnels through the trees trunk and cuts off its sapwood, which eventually kills the tree7.  Evidence has also been found that these beetles can vector a disease-causing fungus, Ceratocystis smalleyi, which could also kill the tree8. Contributed by A. Pellegrini and T. Potter