Description
American beech trees (family Fagaceae) grow an average height of 50 – 70 feet with a trunk diameter up to three feet across. Taller trees may be found in shady forests, with some reaching heights over 100 feet. It is best recognized by its smooth silver-gray bark that can be observed throughout its lifespan, which can exceed 300 years. The distinctive ellipsoid “saw-tooth”  and has parallel lateral veins ending in a point. The leaves of the American beech turn bronze in the fall but may remain on the tree throughout the winter¹, a characteristic known as marcescence².  The American beech is monoecious, with separate male and female blooms occurring on the same tree. It flowers in the early spring; male flowers resemble small yellow clusters, whereas female flowers are smaller red-scaled buds appearing at the ends of spring twigs. The wind pollinated flowers form a conspicuous spiny “beech nut”, which is edible³.  Beech trees produce numerous root suckers that can develop into mature trees10. 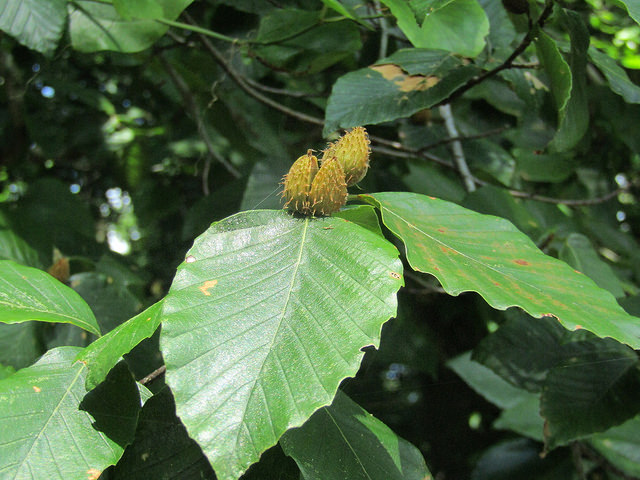 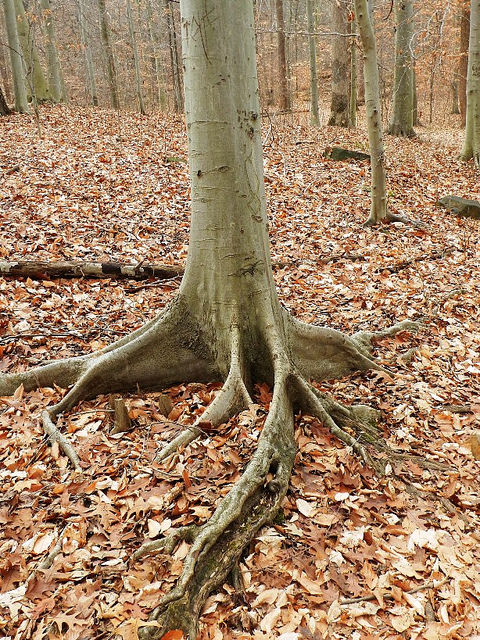 Distribution
American beech is native to the midwestern United States¹,  and its habitat extends through the midwestern US, Atlantic Seaboard, and eastern Canada. Beech trees can be found throughout all parts of Maryland. They prefer slightly acidic, moist, well-drained soils. American beech trees are shade tolerant and are often found along forest streams and ravines³. 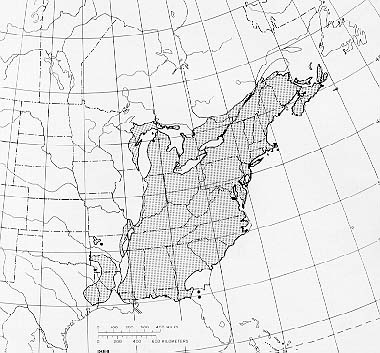 The American beech provides shelter and habitat for insects and songbirds, including the black-capped chickadee. Additionally, beechnuts serve as a food source for many species of birds and mammals, including “mice, squirrels, chipmunks, black bear, deer, foxes, ruffed grouse, ducks, and bluejays”4.

Early settlers valued the American beech as an indication of fertile farmland and utilized its wood for fuel, leaves for mattresses, and ashes to produce lye soap 5.  Today the dense hardwood continues to be a desirable material for flooring, furniture, decorative veneer, and firewood. Coal tar from the American beech is used to make creosote, which has medical and industrial use as an antiseptic, cough suppressant, and wood preservative for ships and railroad ties4 .  Recently, creosote has been vastly discontinued due to possible carcinogenic effects. Ripe beechnuts are also edible to humans and can be roasted or used as a coffee substitute6 .

Threats
American beech trees are sensitive to pH,  and salt pollution, urban pollution, and climate change are significant threats7 .  Invasive insects and caterpillars such as the gypsy moth can cause severe damage to foliage4  .  They are also susceptible to beech bark disease, a fatal fungal infection.  A new pathogen known as beech leaf disease is currently infesting American beech trees; researchers are not yet clear what the culprit is, but suspect an invasive nematode is suspected8.  Thin bark and shallow root systems make American beech trees vulnerable to wildfire damage4.

Contributed by A. Eick and S. Cao