Shumard’s oak (beech family, Fagaceae) typically range between 50 and 90 feet. Their bark is thick and smooth with a gray tint. As the tree develops and grows it becomes more wrinkled and a darker gray shade¹.  The tree has great urban adaptability, is drought tolerant and fast growing. It prefers to grow in well-drained soil¹. The 6 to 8–inch leaves are arranged in an alternate assortment, with a simple complexity and pinnate venation². They are 5-9 lobed with sinuses about three-fourths to the midrib, bristle tipped, and dark green on top and paler below.  Male and female flowers are on the same tree but have different characteristics.  Male flowers are represented by dangling catkins while the female flowers are smaller and can be found close to the stem³. The acorns mature in about two years and grow to be about 0.75 to 1.25 inch with a saucer shaped cap covering one-quarter of the nut².  Acorns must overwinter on the ground before germinating. Shumard’s oak can be found near moist, upland forests and stream banks². It inhabits many areas in the United States and some areas in Canada. It is found in more southern areas in the United States that provide marsh like areas. It’s native distributions are in southern Pennsylvania to northern Florida, west to south east Kansas and central Texas². It can be expected to grow in areas in the highlighted parts on the graph¹. It is limited to certain regions in Maryland: Montgomery Prince George’s and Charles Counties8.  Within the state of Maryland, the tree is listed as state rare (S2) and threatened8.  As a result, there are only a few reported trees in the state and are restricted to specific areas. 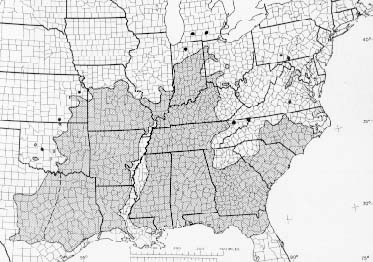 The acorns from this tree serve a major role in feeding deer and squirrels. As well many different species of birds and mammals use these acorns as a food source and the tree itself as a source of shade4.

The Shumard’s oak is hard and strong wood. It tends to be moderately priced when sold. It is used greatly in construction mainly for housing or house furniture including but not limited to cabinetry, furniture, interior trim, flooring, and veneer4.

Shumard’s oak is not endangered or threatened.  It is highly susceptible to oak wilt infection (a fungal disease that clogs conducting elements), this disease may also be spread with the presence of insects5.  Due to the locations of these trees are threatened by fencerow brushing and field clearing to be taken for logging6.

Contributed by A. Jupinka and R. Hackett