Slippery elm (elm family, Ulmaceae) is a common North American tree with slick, sticky, deeply furrowed bark that enjoys full sun to partial shade¹.  Its reddish heartwood and buds have given its alternative name of red elm².  Slippery elms quickly mature to be up to 80 feet tall with wide branches and hairy twigs bearing flowers and fruit seasonally².  Leaves are placed alternately along twigs with petioles typically being ½ inch long3,4.  The leaves of the slippery elm are simple, rough on the upper surface, pinnately veined, and grow to be 4-7 inches long3,4.  They have doubly serrated margins (two sizes of teeth), unequal bases and a long–tapered tip².  The roughness of the leaves can be helpful in distinguishing the slippery elm from its close relative, the American elm, that bears shiny, smooth leaves³.  The slippery elm’s greenish-red flowers, absent of petals, hang from long pedicels and typically appear in mid-march1,4. There are male flowers with stamens and female flowers with pistils that are wind pollinated4. The flowers form into rounded fruits called samaras with papery tissue around the center, where the seed is located¹. The papery wing has no hairs on the margin, which distinguishes it from American elm. This papery tissue helps the wind carry the seed away once it has matured in mid to late spring4. Slippery elm tree seeds can germinate in a variety of conditions and form into seedlings about 2-3 months after becoming established5. Although the slippery elm is considered fast growing, the production of seeds doesn’t start until it is about 15 years old and full maturity isn’t reached until about 40 years old.5. Slippery elms can live to be 200 years old in favorable conditions4. 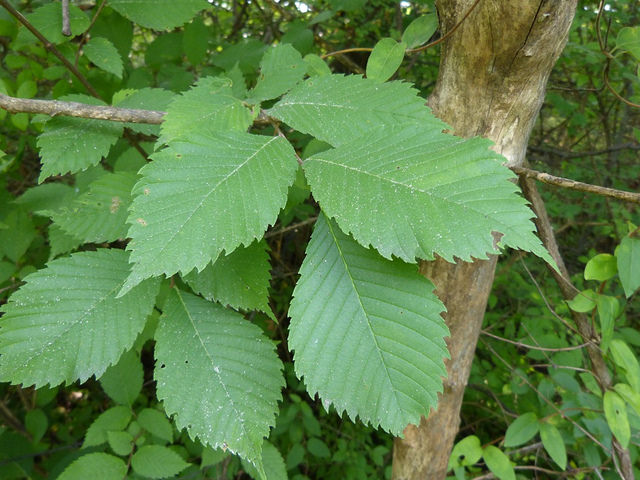 The slippery elm is Native to the deciduous forests of the Eastern United states4. Its range stretches from Nebraska to Maryland and from Northern Florida to Southern Canada. It has been recorded in all but one county in Maryland6. The slippery elm endures many different conditions such as woodlands, steeps, and riverbanks4. 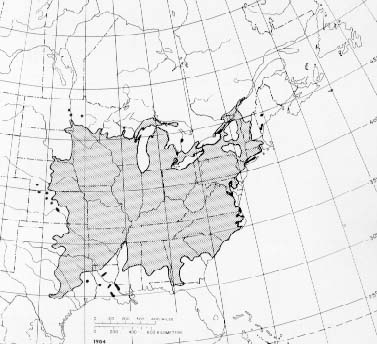 The seeds, sap, and foliage are of great importance to the wildlife around the slippery elm. Over 125 different species of insects feed on the leaves of the tree and host their larvae in its wood4,5.  Seeds and buds are eaten by numerous bird species such as ducks and finches4.  The trees are used as nesting sites for the Baltimore Oriole4.   Beavers use the wood of slippery elms as a food source as well4.

While inferior to its relative, the American elm, the wood of slippery elm is durable and is used for furniture, paneling, and fence posts2,5. Native Americans used different parts of the tree for a variety of medicinal purposes and the inner bark is still used for the production of some throat lozenges².

Slippery elms can be damaged by wood boring insects and bark stripping by deer, but most commonly attacked by disease5.  The widely known Dutch Elm Disease is caused by a fungus transmitted by beetles7. The fungus invades the vessels of the tree and releases toxins into its water supply, slowly killing it7. The more recent disease, called Elm Phloem Necrosis, is caused by an extremely small bacteria that cannot be seen with a microscope8.  The bacterium is transmitted by phloem-feeding insects8. This disease compromises the phloem of elm trees and prevents essential nutrients from being transported throughout the tree8. There is no known cure, and trees affected by this disease die within 1-2 years of contraction8.