American elm or white elm (family Ulmaceae) is a deciduous tree that can reach  heights of 125 ft and diameters of 60 inches in the best habitats.1  Its vase-shaped, broad crown makes it a favorite tree for urban environments.2  The bark is gray and deeply furrowed.  The leaves are dark green, up to six inches long with a doubly serrated (two sizes of teeth) margin, and an asymmetrical base.2  Leaves are smooth on the upper surface.2  The inconspicuous flowers are bisexual and wind pollinated.  They produce a single seeded fruit with a surrounding membranous wing about 0.5 in long with ciliated margins.2

Found most frequently in bottom lands, American elm grows from Nova Scotia west to Manitoba, south to Texas and Florida and along the Atlantic Seaboard.  It prefers moist, flat, well-drained soils, but can be found in many habitats not subjected to prolonged flooding.1  Its tolerance of pollution makes it a desirable street tree, but its current distribution is curtailed by susceptibility to Dutch elm disease. 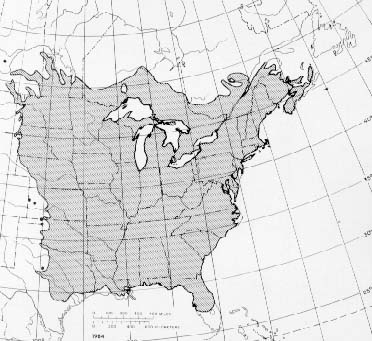 American elm is a host for numerous butterfly and moth larva including Morning Cloak, painted Lady and Question Mark.4  Seeds are consumed by songbirds and small mammals.4

The wood is primarily used for furniture and lumber.  Because of its ability to bend it is particularly desirable for hockey sticks.1

American elm is highly susceptible to Dutch elm disease caused by a fungus (Ophiostoma ulmi) carried by a beetle.  Infestation kills branches and ultimately the entire tree and has eliminated American elms throughout their range.1,5   Backcrossing with resistant elms and genetic engineering has produced resistant cultivars.1  Numerous other fungi and insects attack the tree, but most are not as lethal as Dutch elm disease.