Sweet crabapple, a member of the Rose family (Rosaceae), is a small tree native to North America.  It is also knows as American crabapple, wild crabapple, Biltmore crab apple², or Garland crab ¹.  They usually range from about 15 to 30 feet tall when full grown, with a short trunk, and reddish gray-brown, scales bark ¹.  Winter buds have reddish scales. They may produce thorny side branches ².  Leaves are oval, 2.5 to 4 inches long, are serrate margins and have rounded to heart-shaped bases.  Crabapples also produce flowers and fruits in early spring. Their flowers usually sit in cymes of 2 to 6 with smooth, light pink and white petals, releasing a pleasant fragrance ². The fruits (pomes) are a globoid, 0.75 to 1.5 inches in diameter, that is initially green, then turns yellow once ripened ². The outer skin of the fruit is smooth and waxy, with a juicy and sour inner flesh and several seeds residing in the center ¹. 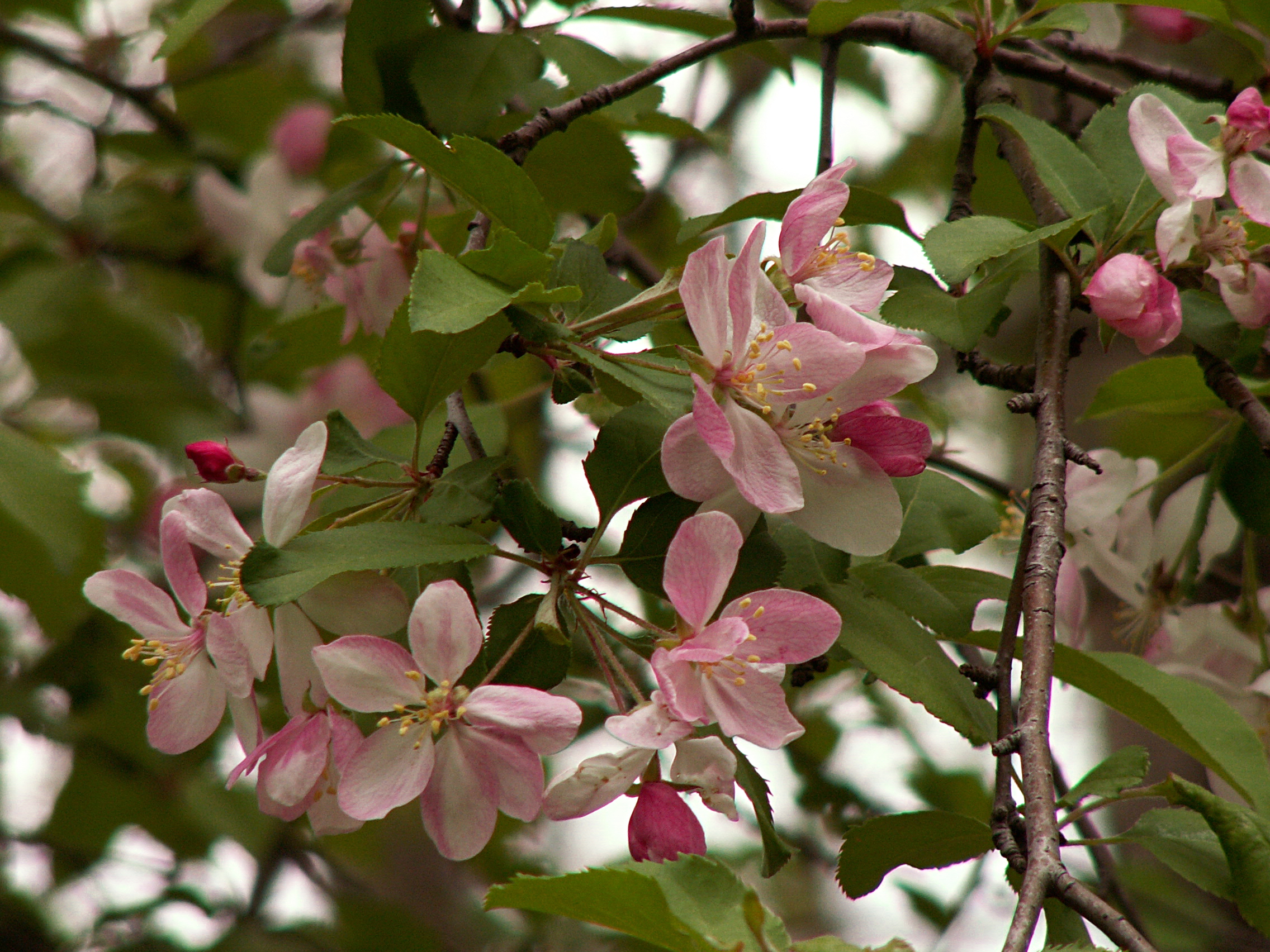 Sweet crabapple is predominantly found in the United States but very few reside in Canada. The tree is generally found in the eastern parts of the United States, in states ranging east from the Mississippi river, but mainly found in the Ohio Valley 2,4. This species has a vast variety of setting habitats, the stream banks, open woods, woodland edges, and savanna ³. They usually prefer areas where there has been slight disturbance, diminishing overhead canopy shade. Although the tree is very adaptable to many environmental conditions, moist but well drained soil is preferred.

Wildlife is quite dependent on Crabapples in many resourceful ways. Sweet crabapple  can be used as a food source, protection, and nesting site. Many different small and big animal species rely on this tree for its flowers, leaves and fruit as their day-to-day nutrients. The flowers are an important source of pollen as well as nectar. There are a variety of bees including honey and bumble bees that cross-pollinate the flowers ².  Other insects such as butterflies and skippers retrieve the nectar. The leaves tend to be eaten by many of the same insects, like caterpillars of viceroy, red-spotted purple and tiger swallowtail ².  Fruit produced is consumed by numerous vertebrates, the most common of which include songbirds, mammals such as fox, opossum, black bear, raccoon, skunk, squirrels, voles, and mice 1,2.  Foliage and is browsed by the deer and rabbits in the summer, and the bark is gnawed on for sustenance in the winter ². The branches are also good for nesting because of their density and thorns provides protection for many birds such as the yellow-breasted chat and orchard oriole ².

The sweet crabapple has a pretty appearance and lovely fragrance, so it makes for good ornamental use for home landscaping, and such a common tree is not hard to find for sale! Crabapple fruit is also edible for humans as well as wildlife. Many different jellies can be made, due to their high pectin and acid content, and juices that you can all find for sale.

Sweet crabapple is a slow-growing and short-lived tree in wild conditions during their immaturity, they do best in open or disturbed areas. Since the crabapple is a member of the rose family, it is prone to diseases and pests. The habitat of the tree is quite important to their preservation, if weeds and grass grow around the juvenile plant this can repress their growth. Or, if the habitat has a high rodent and/or insect population this tends to prevent the growth of the young plants caused by damaging or killing it. When associated with junipers they are  particularly susceptible rust, which is problematic for the leaves, causing many of them to drop 5. This constant damage during wet springs increases the likelihood of the spread and development of diseases.