Shellbark hickory (Carya laciniosa) is a member of the walnut family (Juglandaceae). 12  It is a hardwood deciduous tree that grows to heights of 100-130 ft tall. 8   Its characteristic bark is recognized by its gray color and shaggy, frayed appearance as strips of bark curl away from the trunk. Leaf arrangement is alternate, and leaves have a pinnately compound structure and grow 12-24 inches long. Each leaf has 7 dark green, finely toothed, oblong-lanceolate leaflets that are 7-9 inches long.9   A single tree has both male and female flowers which lack petals and bloom in late spring.6   The  fruits mature from September to October, producing sweet, edible round nuts 1-3 inches in diameter that are initially green before maturing to a hard brown shell. 5  These are the largest and sweetest nuts of the true hickories (genus Carya), earning it the nickname kingnut hickory tree. 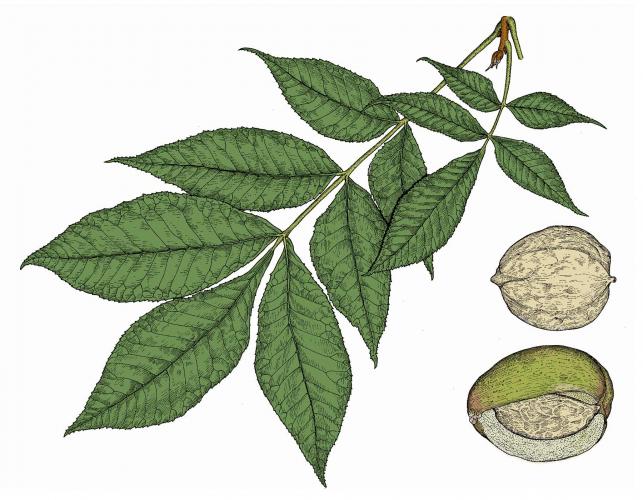 Leaves and nuts  of shellbark hickory 5 Shellbark hickory trees are native to the region of the United States that encompasses the Ohio River valley and the central portion of the Mississippi River basin.¹ Their range stretches from the Mid Atlantic through parts of the Midwest and the Southeast, as seen on the map below.²  Shellbark hickories grow well in temperate forests and floodplains, favoring lowlands with moist soil. They are found on wetter soils than is shagbark hickory. 12  These trees often grow alone within hardwood forests, making them relatively rare to find. Because of their deep taproots, transplanting them is difficult and uncommon.9   Shellback hickory is rare in Maryland. 12

Hickory trees are ecologically important as a rich food source not only for people but also insects and small mammals like mice, chipmunks, voles, rabbits, and squirrels (flying and gray). This in turn supports larger wildlife populations of birds (particularly woodpeckers), bats, foxes, coyotes, and bears.4   Shellbark hickory trees have a shaggy, flaking bark (similar to that of the shagbark hickory tree, Carya ovata) that provides important habitat for insects, birds, and bats.7

Tree roots are connected to a symbiotic network of fungi called mycorrhizae. Hickory trees may be beneficially linked with certain types of mycorrhizae important for a tree’s resiliency and capacity for regeneration, making this connection integral for the health of the forest and its inhabitants.10 Shellbark hickory trees are culinarily prized for their aromatic wood and charcoal which gives food a distinct smokey flavor. This wood is very strong and dense, making it excellent for tools, basket handles, and flooring. It also has a high thermal content, which made it an ideal fuel source historically.8   Hickory trees, along with other select hardwood species, are also associated with the growth of morel mushrooms. Morels are an increasingly popular culinary delight, which may provide a financial incentive to keep shellbark hickory trees growing in the forest for a long time.³

Shellbark hickory trees are particularly vulnerable to damage from forest fires due to their dry, shaggy bark. Fire damage can leave them susceptible to wood rot, fungal diseases, and pest infestations–insects such as the hickory bark beetle and pecan weevil can be devastating to hickory trees.¹ Drought, deforestation of land for farming, and historical overuse for lumber may also threaten this species. Climate change poses an additional threat. Shellbark hickory seeds depend on a dormancy period of 90-120 days with cold temperatures to initiate germination, which could be at risk with shorter cold seasons and higher average temperatures.9 Shellbark hickory trees grow quite slowly, taking approximately forty years to mature to bear fruit. Though they may live for 200-300 years if left undisturbed, due to their low dispersal rate, shellbark hickory populations take a long time to recover.4