Washington thorn is a small or shrub-tree that is a member of the rose family (Rosaceae). The tree is low-branching and typically only grows  25 to 30 feet in height and 25 feet in spread at maturity ¹, and grows best in full sunlight but will tolerate partial shade ¹.   It has numerous, slender thorns about 1 to 3 inch long ¹. The deciduous leaves vary from dark green in the summer and turns orange to red in the fall ².  Leaves are alternate on the stem, ovate to oblong, one to 3 inches long and with irregularly serrated margins ¹.  Leaves may be three-lobed or have 2-4 pairs of lateral lobes.   It produces malodorus white blooms in the late spring to early summer.   The red berries (pomes) may persist into winter 5. 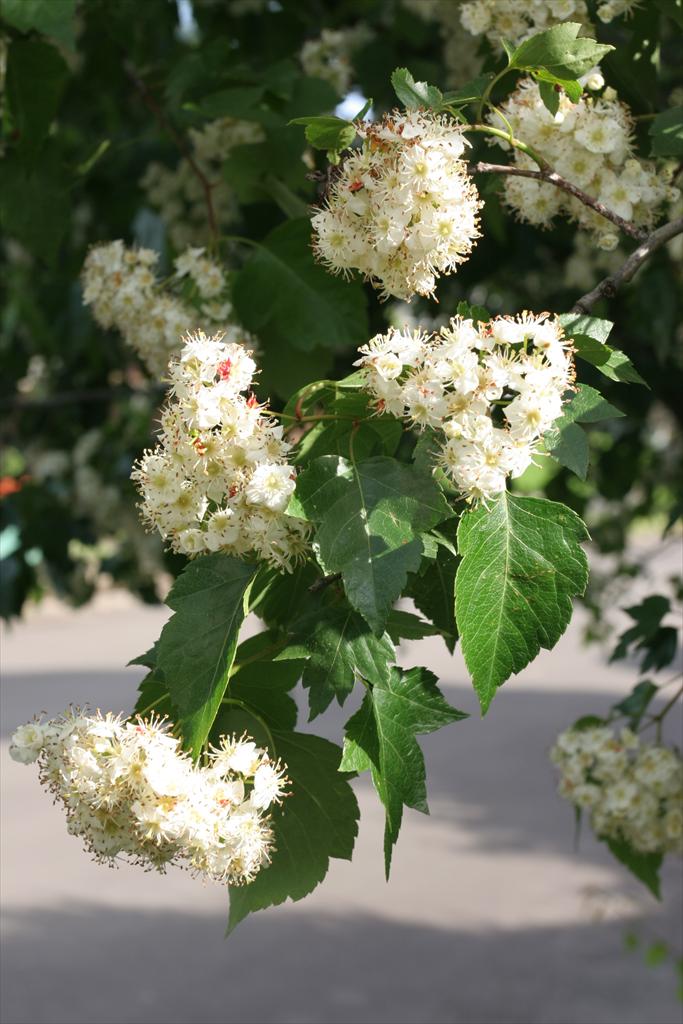 Washington thorns are native to the Southeastern United States from Florida to Virginia and west to Missouri and Arkansas 6.  It has become naturalized in the Northeast including Maryland 6. It’s commonly found in open areas, stream banks and rocky areas. In the 19th century it was introduced into Pennsylvania from Washington D.C.  Additionally, it can tolerate urban pollution, drained soil and can adapt to different pH.

The fruits and flowers on the tree are very important for wildlife. The abundant fruit produced by this tree is eaten by raccoons, squirrels, rabbits, and a range of birds such as cedar waxwings, quail, and wild turkeys throughout the winter ¹. Additionally, it is an important nectar plant for bees and other pollinators 5. These trees are also a larva host plant for Grey Hairstreak, Red-Spotted Purple and Viceroy butterflies ¹.  Lastly, the dense branches thorns and leaves provide nesting protection for birds such as Yellow-Breasted Chat and Brown Thrasher in addition to privacy screening and shade for smaller trees 1,5.

Washington hawthorn is more resistant to pests than other hawthorns.  Fireblight is a bacterial disease that tends to affect many fruit trees including the Washington thorn ¹.  This tree is mostly pest-resistant; however, it sometimes is affected by aphids or scales 6.