The red mulberry is a member of the mulberry family (Moraceae).  The height of the tree at 20 years old is around 45 feet, and its mature height can reach up to 70 feet¹.  The mature spread is 35 to 40 feet². The red mulberry has a short trunk and spreading branches that form a round–topped crown¹. The dark brown bark can vary in texture from smooth to scaly¹. The leaves are up to 5 inches long and are simple alternate, they are ovate to oblong-ovate shaped and lobed1,2.  The leaves may be simple or with one or two lobes.  The leaf base has a square shape, the tip is pointed, and have serrated margins¹. The upper side of the leaf is rough, and the lower side is covered in soft hairs¹. When broken, the petioles produce a milky liquid¹. They can be monoecious or dioecious, meaning male or female reproductive structures on different trees or both on one tree². The red mulberry blooms in early spring from March to April depending on climate, and the flowers are green, white, or brown3,4.  Female trees produce dark purple fruits that are around 1 inch long³.  Several flowers produce a single fruit, called a multiple fruit.  The leaves turn yellow in the fall6. 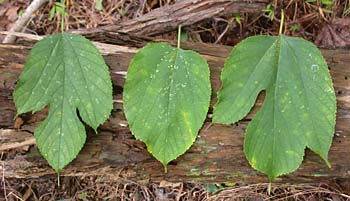 Red mulberry trees are widespread in Maryland and are found across the state7,8. They are native to rich woods, bottomlands, and wood margins². They usually grow in shaded woods, streams, riverbanks, ditches and ravines³. The red mulberry is native to most of the eastern and central United States as well as south eastern Canada, from southern Ontario and Massachusetts and Minnesota south to Florida and Texas². It also can grow in a range of conditions from deep shade to full sun6.  It prefers moist rich soil with good drainage6. 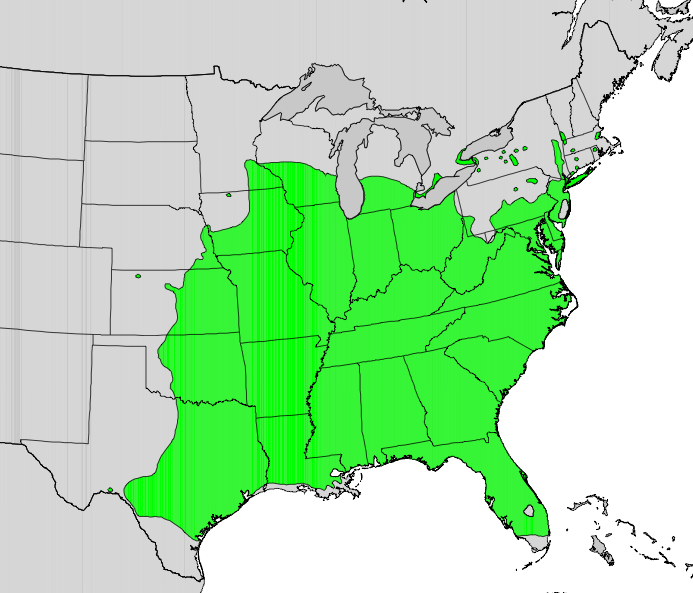 Red mulberry trees attract birds and provide a food source for them, especially gray catbirds and northern mockingbirds. The tree also provides a food source to animals such as foxes, opossums, squirrels and raccoons6.  These trees also attract butterflies and are a larval host for the Mourning Cloak butterfly (Nymphalis antiopa)³. It is also considered by some to be a host plant for the Red Admiral butterfly6.

The red mulberry does not have a major economic importance. The wood is rot resistant and can be used for objects like furniture, fenceposts, and veneers1,2.  In some locations the female trees can be considered undesirable for planting because of the purple fruits they produce can stain sidewalks².

Contributed by H. Moos and A. Jules