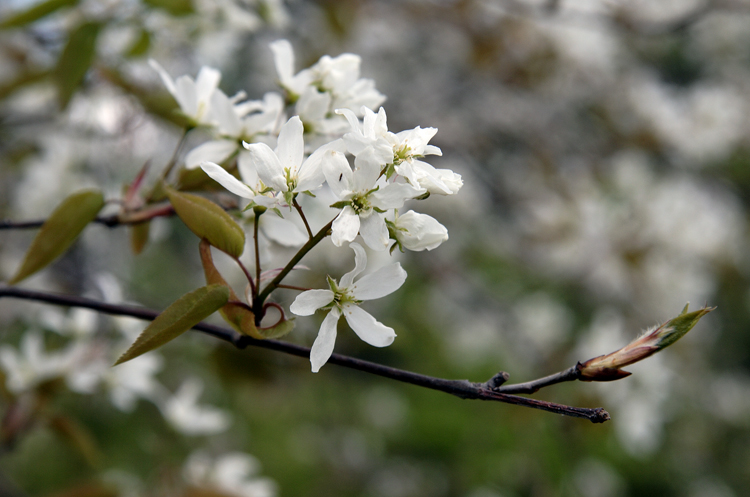 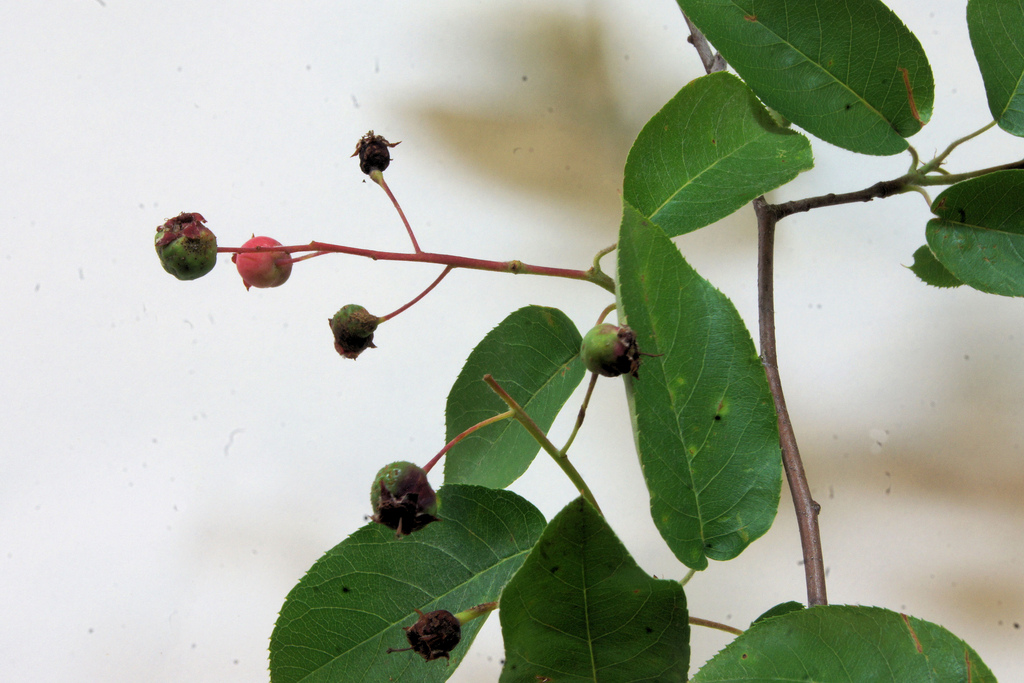 The common serviceberry is distributed from the southern tip of Newfoundland, Canada,  to the northern tip of the Florida Panhandle, and west toward southern Ontario and Quebec, eastern Kansas, the eastern edge of Nebraska, and southern Mississippi and Alabama².   North of Virginia, it is found along the Atlantic coast, but grows inland in regions south of Virginia².   In total, the common serviceberry is native to 40 states and provinces across North America².   This species grows well in acidic, moist and well-drained soils but can grow in a variety of habitats, including swampy lowlands, dry woods, sandy bluffs, rocky ridges, forest edges, and open woodlands and fields 3,4.   In Maryland, the common serviceberry can be found to grow primarily along waterways and throughout the entire Chesapeake Bay watershed5.  Historically, the bloom of the serviceberry’s white flowers along the water’s edges signaled the beginning of fishing season for shad fish, which are predominant in the Mid-Atlantic region5.

The consumption of the common serviceberry fruit is very popular with over 40 bird species, including the Eastern Bluebird and the Baltimore Oriole, and with several mammals such as squirrels, chipmunks, mice, voles, and foxes4,6.  Some larger mammals, like moose, elk, and black bears will eat the leaves and twigs of this tree species7.  In the spring, the common serviceberry blossoms entice beneficial insects, such as bees and butterflies, which provide the pollination services7.  Since the common serviceberry are early bloomers, they are a very important source of food for many insects emerging from a chilly winter7.  Some bird species, such as robins and cardinals, are known to nest in its branches7.  Additionally, serviceberries are integral plants for the nesting of certain butterfly larvae, like tiger, viceroy, and admiral butterflies7.

The common serviceberry may be infected by many of the diseases common to plants in the Rosaceae family, though damage to the plant is mostly cosmetic8.  Diseases that may infect the common serviceberry can consist of leaf spot, rust, or powdery mildew8.  Pests that eat away at the bark of the tree include Japanese beetles, spider mites, aphids, and leaf miners3,4.  Additionally, the bark of the common serviceberry is very thin and can be easily damaged by machinery8.  Environmental damage such as drowning and edema may occur if the soil where this species is growing becomes too water-saturated, leading to rotted roots and bark and blisters on leaves4.