It all started with a phone call from Paris in October 2013 — “I was wondering if you have the papers of Dorothy Reeder?”

Dorothy Reeder had been the Library Director at Towson from 1947 until 1970 and then stepped into a newly created position as Archivist until 1973.  But, as is the case with most of our staff and faculty, she didn’t leave behind a collection of papers.  Most of what we had was business correspondence — meeting minutes and agendas, memoranda, project planning notes, that kind of thing.  None of those things would seem exciting enough to be called “papers”.

And then the woman on the other end of the phone told me that Dorothy Reeder had been the Library Director at the American Library in Paris [ALP] during World War Two, even during the Nazi Occupation of Paris, and had only left when it was feared she would become a target when America entered the war after the bombing at Pearl Harbor.

After the phone call ended, my new contact in Paris and I shared some things we found about Dorothy — articles and books had been written about the ALP and her involvement in keeping it running during the Occupation.  There she was in photos, manning the desk, as fashionable as only a woman living in Paris could be, her dark hair tucked under a hat.

I was elated.  What a fierce woman this Dorothy Reeder was — she was one of four Americans left in Paris at the time they were evacuated and six days after the Allies freed the city, she was back with the Red Cross, offering aid.  She was better than my other hero, Indiana Jones, and she worked in my library!

I even combed through steamship passenger lists to try and get a good handle of the timeline when all this happened.  And I was delighted to find she and I shared a birthday!

But it was the timeline that was giving me trouble.

The first problem was that in the article, it said that Dorothy Reeder first came to Europe with the Library of Congress in 1929 to work on the Ibero-American Exhibition in Seville, Spain.  The article said she’d been working at the Library of Congress for 6 years, and that she’d fallen in love with Europe and so found a job in the Circulation Department at the ALP and had worked her way up to the Director’s position in 1936.  I wanted to find out what happened before that, and what happened after the war, so I started plotting out everything year by year.

In the hopes of not making this more confusing, I’ll cut to the chase — I was researching the wrong Dorothy.

But she wasn’t.  And for a little while, I was disappointed.  I sent an email to my contact in Paris to let her know the mistake we’d made.  I alerted friends at work that the awesome blog post I’d been planning wasn’t going to happen because we had the wrong Dorothy.  I groused at my husband about it at lunch.  And he said, “Isn’t it good you found out before you wrote that blog post?  You’d have had to write a second one to correct it. You should write about the importance of fact-checking.”  So here I am.  Doing just that.

Our Dorothy is still kind of fierce.

She was born in Williamsport, Pennsylvania, graduated from high school there, and then moved to Michigan to go to school at the Kellogg School of Physical Education at Battle Creek College.  The Kellogg school was created and run by John Harvey Kellogg, one of two brothers who helped promote the idea of corn flakes as a delicious part of your nutritious breakfast.  (Have you ever read “Road to Wellville” or seen the movie where he’s played by Anthony Hopkins?  Or maybe seen the Detroit episode of “Drunk History” where he’s played by Owen Wilson?)

Back to Dorothy.  She graduated from Kellogg in 1924 and took a job as a Physical Education teacher at Susquehanna University where she also attended classes.  After graduating from there with an associates degree in 1926, she went to Ohio to work with the Camp Fire Girls.  Ultimately, she earned her Bachelor’s in Library Science from Drexel, and her Master’s from the University of Michigan.  She bounced around at various libraries in Virginia, including Roanoke College, the College of William and Mary, Blackstone College for Girls, and Radford college, before landing at the State Teachers College at Towson in 1947.

At the time, Earle T. Hawkins was the President of the school, and he worked with Reeder to increase the salaries of the librarians on staff.

As library director, it was Reeder’s task to make certain that the library had adequate space and appropriate material for STC students.  Originally the library was housed in Stephens Hall.

But after the population boom following World War II, it became evident that the library needed to be much larger to accommodate the growing student body, so Reeder moved the library out of Stephens to a new building, the first Albert S. Cook Library.

That library was in what we now know as the Media Center. 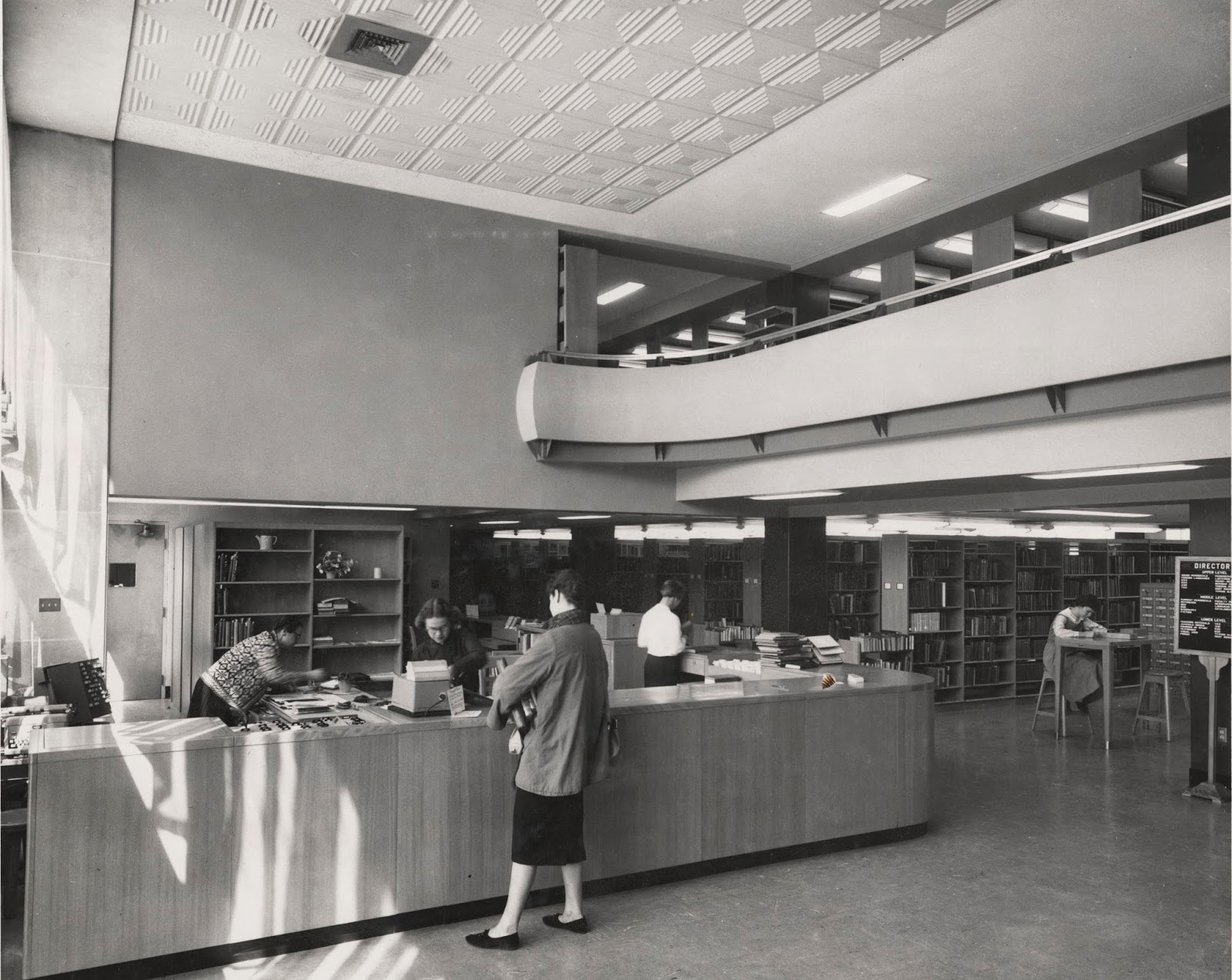 This library also had the first room dedicated to Special Collections — Reeder had worked with Merle Yoder, the head of Circulation and a graduate of the Maryland State Normal School, to collect items of significance to the school history.  The valuable stuff was locked up in the President’s Office, but the library had the documents — yearbooks, diplomas, photographs.

Eventually, though, the change to a Liberal Arts college coupled with increased student enrollment meant that the library had to be expanded.  And so Reeder moved the library again, to its current space in 1969.

A year later, Reeder stepped down from the director’s position and was asked by James Fisher, president of Towson State College, to establish a formal archives for the school.  Reeder, who was not trained in archival principles, traveled to various other archives to learn how to create an organizational scheme, and began contacting alumni groups to ask for donations of material for the department.

Here are photos of the inventory she made for our photographs collection.  On the left, you can see she was trying to sort out subject headings for each photo as well as numbering. 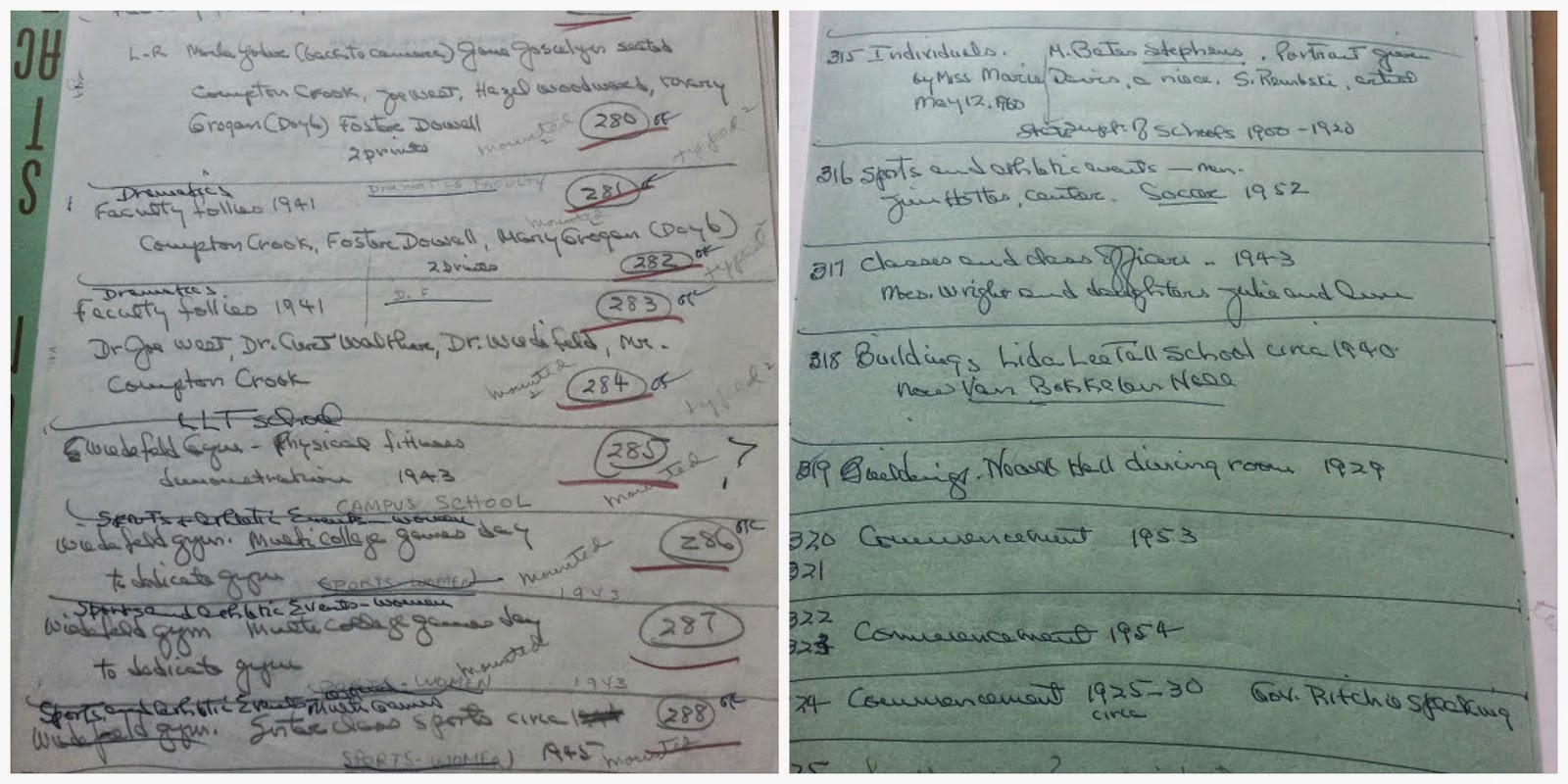 Her square, strong handwriting is inst
antly recognizable to me.  When she got tired, she made spelling mistakes, and her handwriting would begin to slope to one side.  In a time before computers made our work so much more manageable, the hundreds of pages of handwritten notes she left behind are impressive.

This week is National Library Week, and so I thank our Dorothy Reeder, for her twenty-five years of service to Towson.