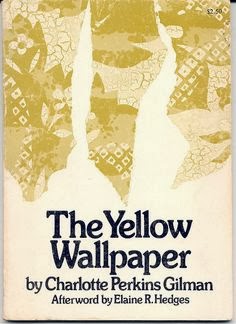 “The Yellow Wall-Paper,” wrote Elaine Hedges in 1973’s Feminist Press edition of the Charlotte Perkins Gilman classic, “is a small literary masterpiece.  For almost fifty years it has been overlooked, as has its author, one of the most commanding feminists of her time.  Now with the new growth of the feminist movement, Charlotte Perkins Gilman is being rediscovered and The Yellow Wall-Paper should share in that rediscovery.  The story of a woman’s mental breakdown, narrated with superb psychological and dramatic precision, it is, as William Dean Howells said of it in 1920, a story to ‘freeze our . . . blood.'”

This month, Cook Library is celebrating Women’s History Month with an exhibit about The Yellow Wallpaper, a story that might not have come to light were it not for the work and influence of Dr. Elaine Hedges, a faculty member at Towson.

Hedges joined Towson State College’s faculty in 1967 as an assistant professor in the English Department.  She had spent the previous 15 years teaching at Harvard (where she’d earned her doctorate), Wellesley College, San Francisco State University, the University of California at Berkeley, and Goucher College.  She’d earned her Bachelor of Arts in English Literature and American Studies from Barnard College, and her Master’s in American History at Radcliffe Graduate School, both women-only institutions at the time, just after World War II.

“She was quite a changed person after the women’s movement revived in the late 1960s,” her husband told the Baltimore Sun in 1997.  “In a sense, she was liberated.”

Hedges’ arrival at Towson coincided with a number of changes on campus.  The school had only recently become a liberal arts college after almost 100 years as a teachers training institution and college.  The long-time president, Earle Hawkins, was on the verge of retiring after 20-plus years in office and would be replaced in 1969 by James Fisher.  The programs and enrollment at the school were growing exponentially by the semester.  And there was a growing realization that things on campus were not as equitable as would be desired, for women and minorities in general.

In October of 1971, the Newell House Council — a body elected by the students who lived in Newell Hall, which was women-only at the time — invited Hedges to speak about Women’s Liberation at what they designated as a “cultural event”.

“A summary of the role of women in history was given,” reported the Towerlight. “As according to Ms. Hedges, women for the most part are ignored in history textbooks.

“As a member of the Commission on the Status of Women in the Modern Languages,” the article continued.  “Ms. Hedges has a special interest in the aspects of discrimination against women, particularly the languages field.”

Hedges wrote a reply to the article which was published in a later edition of the Towerlight: “The important points are that women tend to be massed in the lower academic ranks and in the less prestigious institutions, and that if they work part-time, as many of them do, they ordinarily do not receive pension and retirement benefits.”

It was during this time that Hedges and Sara Coulter, another faculty member in the English department who had arrived at Towson in 1969, began promoting the idea of developing Women’s Study courses with faculty members from other departments on campus.

In the meantime, Fisher and Dean Shaw were addressing concerns of equity brought forth by members of the Faculty Association Committee on Women and other women and minority interest groups.

By 1972, Fisher’s administration had offered support of a Women’s Studies program publicly, as well as creating a library budget, and setting aside room for offices and a Women’s Center.  A committee of faculty, staff, and students was formed to develop classes for a Women’s Studies concentration in the Arts and Sciences Major, with Hedges and Coulter as co-chairs.

A 1973 memo to campus explains the Committee’s mission:

2.)To explore means by which women can be more adequately represented in the entire curriculum

3.) To assist in the development of grant proposals to fund Women’s Studies courses and/or programs.”

“Our intention,” the committee continues. “Is to accumulate information so that we may be an adequate resource for Women’s Studies in each discipline.”

By 1973, the concentration and three Women’s Studies classes appeared in the course catalog — “Women in Perspective”, “Women in Art and Literature”, and “Women in Society”.

That March, Hedges wrote a response to an editorial in the Towerlight.

“The two paragraphs in the editorial warranting the most serious response are those which ask why, if women have been dissatisfied, the liberation movement began in the 1960’s and 1970’s rather than in the 1940’s and 1950’s; and whether in the past women did not acquiesce in, or perhaps even establish, such institutions as the monogamous marriage, domesticity — the double-standard (?!)  Obviously a detailed knowledge of several centuries of history, of changes in the institutions of marriage and the family and hence of women’s roles within these institutions would be necessary for full understanding, and only brief answers can be given here.  The need for this understanding is, of course, precisely why Towson State College is now offering courses in Women’s Studies: in order to enable students who are seriously interested in such questions to have the opportunity to explore them.”

By the time Hedges retired in 1995, the Women’s Studies program “had grown to include 40 faculty members, 50 courses, and reached an average of 2,000 students a year“, according to her citation in the Maryland Women’s Hall of Fame.  Today, it is known as the Women’s and Gender Studies program.

Hedges’ influence was profound outside of campus as well.  Besides her work with the Feminist Press, she also helped co-found the Charlotte Perkins Gilman Society, and was a member of the National Women’s Studies Association, as well as various other professional organizations.  She also worked with Coulter and Beth Vanfossen to establish the National Center for Curriculum Transformation Resources on Women in 1993, an organization designed to disseminate material and advance curriculum change to foster diversity.  She was also the author or editor of a number of books, both about feminism as well as literature.

The library at Brown University holds her collection of papers and has published an extensive finding aid describing the collection.