Believe it or not, this isn’t really that unusual a question for students at the Maryland State Normal School, first incarnation of what is now Towson University.

By 1876 — a decade after its creation — MSNS already had in place “literary societies”.  There is no exact date of their origin, however, it is known that at first, all students belonged to the Normal Literary Society.  As enrollment grew, a second group was formed and named the Pestalozzi Literary Society.

Obviously, the Norms were named after the school itself.  (And for those of you wondering why in the world the school was named “Normal” anyway, that’s another history lesson. Essentially, it’s a term we lifted from the French who called their teacher training schools École Normale Supérieure. “Normal” in this instance really just means “standard”.)

The Pests were named after Johann Heinrich Pestalozzi, a pedagogue from 18th century Switzerland who was a proponent of holistic education.  His motto was “Learning by head, hand and heart”.

While no-one knows the origins of the literary societies, the reasoning for their creation is one that might be familiar to today’s Towson students.

While the class sizes at MSNS were small — enrollment ranged from 200 to 400 students depending on the year — the school was, until 1915, a commuter school.  There were no dormitories on the school grounds, and therefore, much work was done to create and foster school spirit among the students and faculty.  Every new student and faculty member was made either a Pest or a Norm as soon as school began for the new term.  The school gathered together and everyone watched as the fates of the new community members were determined by a slip of paper drawn for each one with either “Normal” or “Pestalozzi” written on it.  It’s all a bit Harry Potter and the Sorting Hat.  As told in Seventy-Five Years of Teacher Education the event seems rather dramatic:  Each person when called, stood, came forward, drew, handed the paper to the persons in charge.  It was then announced to which society the individual belonged for the rest of his life!

As for what these societies did, it seems reasonable to think that at first they created literary journals — collections of poems, essays, and even news stories.  These journals were printed before the school offered The Towerlight and perhaps were more like our Grub Street than our student newspaper.

In the spring, the two societies would compete against each other for the coveted flags and medals. These banners would be carried for the next year by whichever society won that particular event. 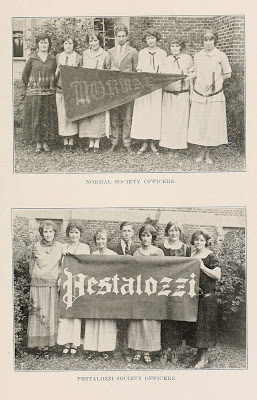 Each society also carried its own flag with its name. In this page from the 1924 yearbook, we see the Normals with their triangular pennant, and the Pestalozzians — I did not make up that word, it’s what they called themselves sometimes — with their large rectangular banner.  We no longer have the Normal banner, but we do have the Pestalozzi one.

As you can see, it’s the Pest colors — blue and gold.  It’s made of felt, and entirely hand-sewn.  I’ve included a couple close-up photographs so you can see the precision of the stitches.

Except for a few holes, it’s in fairly good condition.  We keep it tucked away in a climate-controlled room, so hopefully it will remain that way for many years to come. 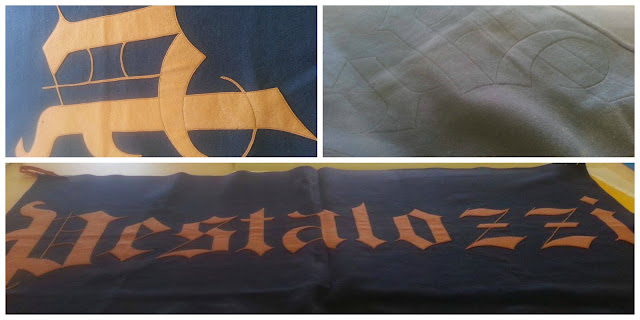 As time went on and more students and faculty joined, the societies’ activities branched out until by 1924, when the school
population had positively boomed due to the absorption of the Baltimore Teachers Training School, the societies each created various subgroups. Often these had to do with debating or dramatics.  Writing and performing songs was also a popular part of the entertainments.

In 1925, the Pests reported that they had gained 400 members with the induction of all the new students who began that fall.  And activities for the next two years ranged from the typical public speaking, story-telling, writing, and play-acting to include philanthropy and sports.

In 1925 the Normals set up a scholarship fund for incoming students and the Pests followed suit with their own scholarship fund in 1926. Until 1954, students received loans from both the Normal and Pestalozzi gifts.  After that, they were lumped together with other class and individual gifts as The Student Loan Fund.  This fund was in existence for another 30 years, until 1980.

As for sports — the societies competed with each other in the fall of 1926 in a field hockey game.

Ultimately, it seems the literary societies, like many things, became victims of their own popularity.  It was felt that too much time was devoted to all the writing and singing and dancing and sporting and philanthropy.  Other student organizations had come into being — there were theater and music groups outside the societies — and it was decided that the Normals and the Pests should be disbanded.  Instead, groups like the Mummer’s League became the new focus for student activities. 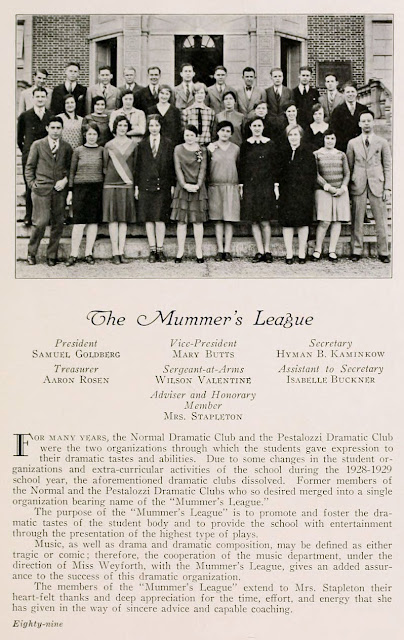 But the Norms and the Pests had done their part.  They had created a feeling of community for the members of the Maryland State Normal School, and I’m sure many alums would indeed say they were lifelong members of the societies.