Tucked away in our photographs collection are four tiny snapshots of young women and a couple children swimming.

While the photos are charming and bucolic — a beautiful pool in the middle of a country setting — it is the description on the back of the photos that offers up the most interesting part of their affiliation with Towson’s history: 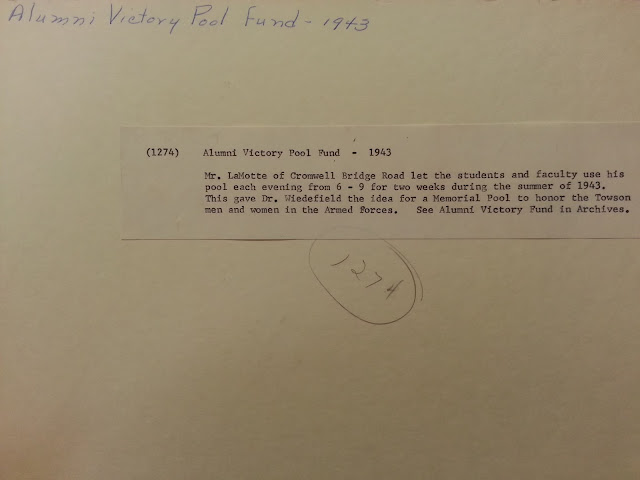 Mr. LaMotte was most likely Frank L. LaMotte, a chemist and local businessman who had founded a water-testing products company in 1919.  He and his wife were heavily involved in many local organizations like the Maryland Historical Society and the Baltimore County school board, and LaMotte was one of the founders of the Towson YMCA.  It seems natural, as well as generous, that a local businessman interested in both education and athletics would offer the use of his pool to local students.  And I’m guessing the boys pictured in the photos with the women from the State Teachers College are LaMotte’s sons — Frank Jr., Charles, and David.

LaMotte would later move himself and his company to Chestertown, Maryland.

But that’s only half of what makes this series of photos so very interesting.

The second part of the story is what happens with that “Alumni Victory Pool Fund”.

There’s no record other than the back of these photographs to suggest that this was indeed the inspiration for building a swimming pool on campus.  But Dr. Wiedefeld, herself an alum of the school, was indeed very motivated to raise the funds for such an endeavor and to do it in honor of those who had served their country during World War II.

By the fall of 1943, members of the school community were busy raising money to buy war bonds.

Students were divided into teams and competed to see who could raise the most money.  Every team member pledged a certain amount of money per week — in 1945 it was a dime, which would be about $1 in today’s terms. That might not seem like a lot of money to you and me, but keep in mind that the minimum wage at that time was 40 cents an hour and a dime could buy a loaf of bread.  For college students in the midst of a wartime economy, pledging that much money was quite an endeavor.

In a 1945 Tower Light report, a plan for the year was outlined.  The goal was to raise $650 through pledges from the student body and another $100 from supplemental fundraising.  The $750 total would be enough to purchase a Unites States Victory Bond worth $1,000.

By that point, the school had raised $6,000 and projected that it would need $10,000 to have enough money to build the Memorial Pool, as it was called then.  It met that goal by the end of 1946, however, no pool was constructed.

A May 1947 Tower Light article reported “the State Board, which has itself contributed generously to the fund, will not approve building plans now because of the high cost of labor and materials.” The post-war building boom was underway and houses and businesses were taking precedence over things like college swimming pools.  It was decided that the money should be held because a new gym would be built in the future and the money could then be used to build an indoor pool at that time.

Twenty years later, the fund was still sitting, unused, and with compounded interest was now valued at over $16,000.  And the school desperately needed a new gymnasium.

In 1966 the school received bids from various contractors detailing the costs of a new gym with indoor pool.  The bids were much more money than the school had and the Maryland Legislature had to approve additional funds.  As plans moved forward, the naming of the pool became something of a point of contention between former President Wiedefeld and her successor and president at the time, Dr. Earle. T. Hawkins.

Hawkins proposed naming the new pool the “Alumni Memorial Pool” and placing a bronze plaque to remember the Towson veterans on a wall next to the pool.  Wiedefeld was adamant that the Alumni Association had nothing to do with the planning or building of the pool and felt that it would cause confusion for those who had donated to the pool twenty years before.  She also felt that the Alumni Association had been charged with holding the raised money in trust, not authorized with spending it.

The letters between Hawkins and Wiedefeld got rather heated.

Ultimately, the pool was built in what is now known as Burdick Hall, and it was named the Memorial Pool.  It opened in the spring of 1968 — an endeavor twenty years in the making. 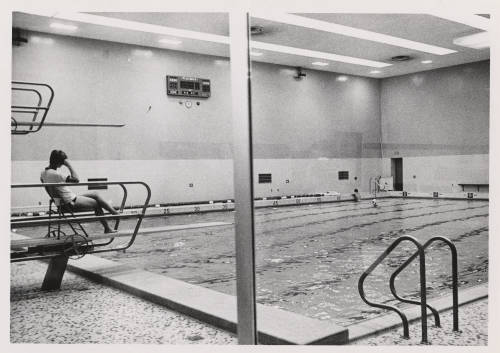