This story begins, as many stories might, with a picture of a man and his dog.

Or rather, three pictures. 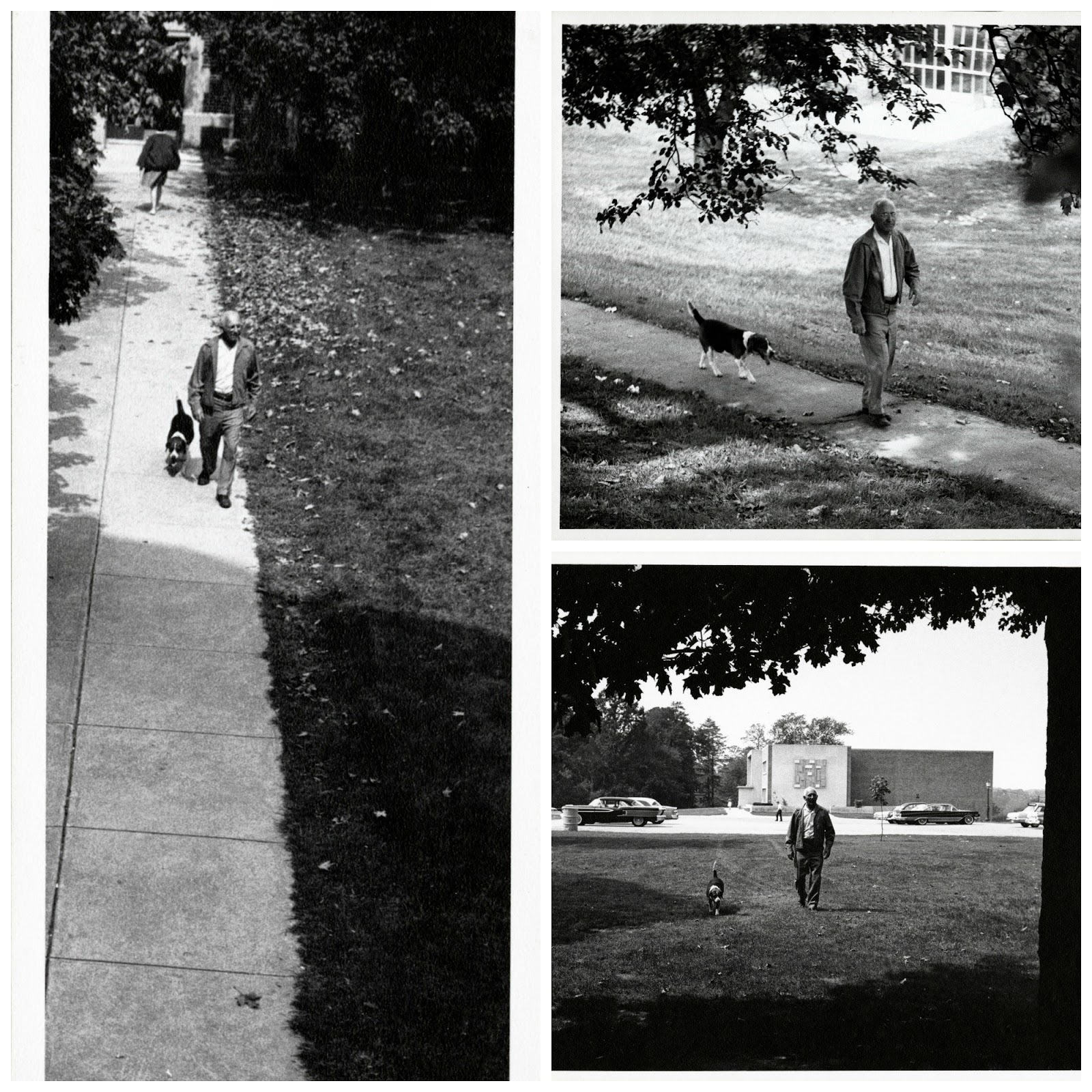 That fall was the very first semester that Towson was known by its new name, Towson State College, and it was no longer just a college for teachers, but a liberal arts school.  Richardson, was 61 years old and had been working on the Towson campus for the last 41 years.

He started in building maintenance in 1922 when Lida Lee Tall was the President of the then Maryland State Normal School.  According to department reports at the time, the Chief Engineer was named “J.B. Richardson”, but we’re not certain if there is any relation.

According to the Chief Engineer’s reports, the department was responsible for the coal that came in via the Ma & Pa railroad line near the Power House, the electric bulbs that needed to be replaced, dry cell batteries used by the school, and general repairs to buildings and grounds.  There was some confusion for a bit about who was responsible for certain duties.  Was Mr. Ehlers, the farmer, responsible for disposing of the coal ash?  Who took care of the school truck?  And who estimated the amount of ice the school used?  Needless to say, the Engineer shop had its hands full.

When Maurice arrived on campus, it was in the middle of a big uptick in student enrollment, thanks to the efforts of Dr. West, Dr. Tall’s predecessor, and continued work by the MSNS staff.  At the time, the course of study was two years and students who were graduates from an approved four-year high school class were admitted.  And, tuition was free:  “All students who enter are now classed as scholarship students, since any worthy Maryland student, duly certified as prepared to undertake Normal School work, can obtain admission to the school simply by agreeing to the obligation to teach in the public schools of Maryland for at least two years after graduation.”  The only things students paid for were room & board and registration, lab, and health fees which all totaled $115 a year.

One of the students who started the year Maurice arrived was Sue Ellen Wright from Caroline County.

There isn’t much to piece together about her start at the school.  We know she was from Caroline County, because that’s what it says in the commencement program for 1924.  She was a member of Nu Sigma, a sorority that was geared towards social activities such as “picnics, theater parties, dances, and luncheons”.  (Nu Sigma and other sororities like it would be banned 5 years later.)

By the end of her time at Towson, Sue was writing poetry, and was known for having the answer, judging by what can be found in the Oriole — the student newspaper and yearbook at the time.

She must be here somewhere in this senior class photo, but it’s hard to see all the students, even when looking at the original.

The Class of 1924 was tight.  They celebrated reunions for at least 60 years.  They’d written a class song and kept a scrapbook and while they were the biggest graduating class the school had seen yet, they all seemed to know one another.

The school itself, while growing, was still small.  And it’s not hard to imagine that Sue Wright at one point met a young engineer while on campus.

Again, all we can do is guess as to how it happened, but ultimately, after spending 9 years teaching and serving as an advisor to young rural teachers who came after her, Sue Wright married Maurice Richardson. 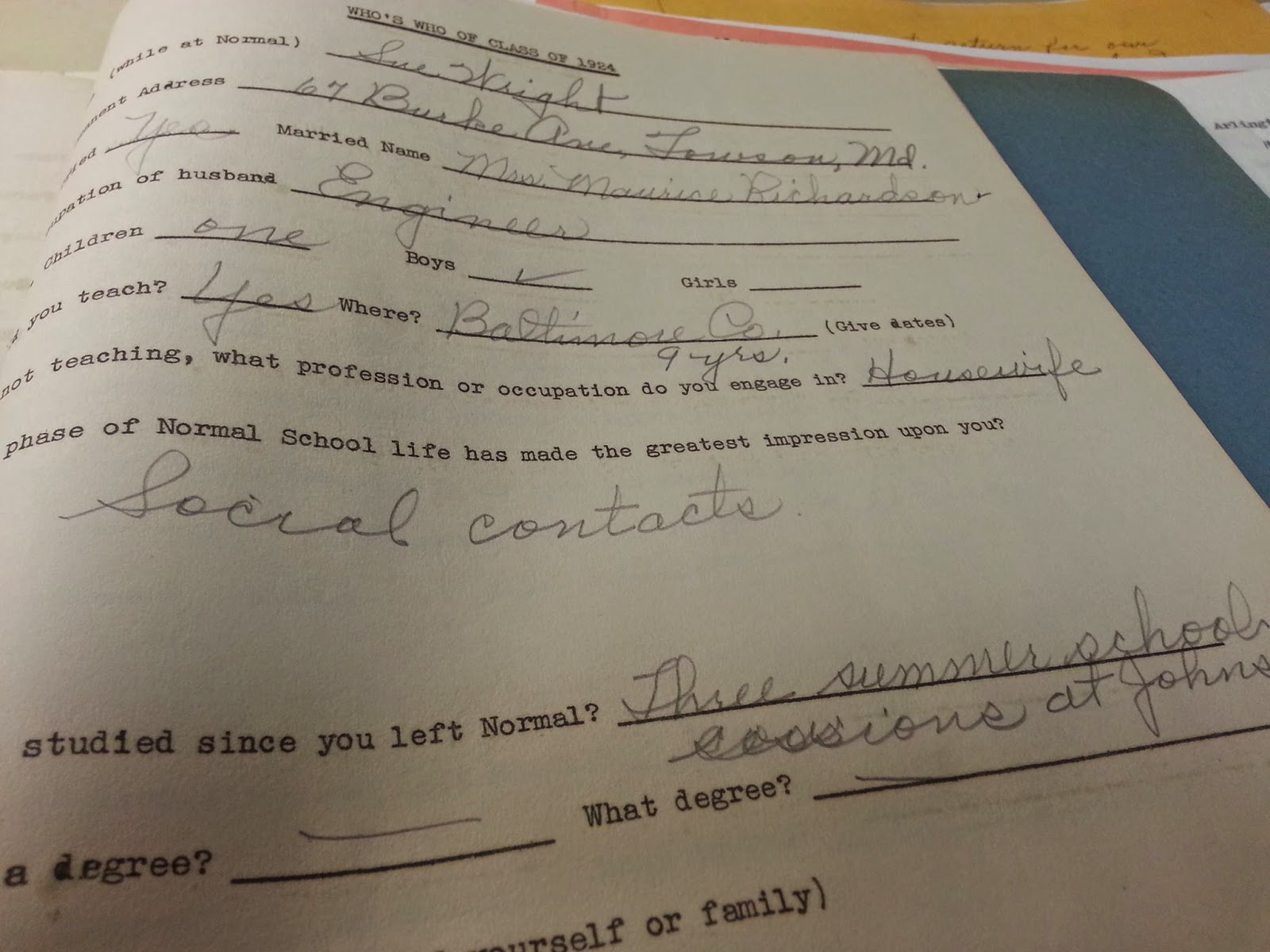 She spent a few years as a housewife, which we know from a class reunion survey she filled out in 1939.

Ultimately, she did not return to teaching.  Perhaps there was still some discouragement to do so from people who thought that married women shouldn’t be teachers.  Or perhaps the labor market wasn’t in her favor, although teachers were sorely needed during World War II.

For whatever reason, Sue joined her husband on campus and became the bookstore manager in 1942.

At that point, the bookstore was called the “Book Shop” and was in Stephens Hall.  She was interviewed by the Tower Light when she began, and from that we can glean that her young son was attending the campus elementary school, which would be re-named the Lida Lee Tall school that year.  (She was also confident that the Allies were going to win World War II.)

In fact, not only did the Richardsons work and attend school on campus, but for a time, they lived on campus as well.

This house, originally called Waveland, was part of the original land purchase for the campus in 1913.

“In 1922”, it says. “Mr Richardson, chief engineer, came to STC.  He was in charge of all the school maintenance until the job became too big; then he started working with the heating system exclusively.  Five men work with Mr. Richardson on this job which is far from small.  For example, a couple of weeks ago, something in one of the boilers needed replacing, so at about ten at night, after the boilers had cooled so that a person could stand inside for ten minutes, Mr. Richardson and crew climbed inside and repaired it.

“If you think that’s easy, try it sometime!  By the way, those boilers use up about nine tons of soft coal a day.”

No wonder the Richardsons lived on campus — emergency repairs could come up at any time.

The article also reveals that another person had taken on school maintenance and had 7 men working under him — painters, carpenters, plumbers, mechanics, and electricians.

Ultimately, after 45 years on campus for Maurice, and 25 years as an employee for Sue, they both retired in 1967.

They’d moved to Cockeysville at some point — the Cottage was torn down in 1964 to make way for Smith Hall, so I’m guessing that’s when they moved.  Maurice died there in 1975 at the age of 73.

While the story of Maurice and Sue Richardson is unusual, it is not entirely unique at Towson University.  Many people have devoted years of their lives to Towson’s success.  Every spring the Office of Human Resources celebrates employees’ service milestones and pays special attention to those who complete 30 or more years of service.  Sometimes the names of those staff and faculty are well known, but most often they are not.

George Eliot ended her novel Middlemarch with a sentence that describes the Richardsons and those like them: “the growing good of the world is partly dependent on unhistoric acts; and that things are not so ill with you and me as they might have been, is half owing to the number who lived faithfully a hidden life”.

This post is dedicated to all our friends in Facilities who help keep our department in tip-top shape.  Without their prompt attention to various concerns, we would have a lot more work on our hands.  In the spring of 2014, the library experienced a major flood that meant a lot of demolition and rebuilding on various floors.  But the guys from Facilities said the first place they checked was our department, and we were lucky to have escaped it all with zero damage.

Thanks to Marvin, Gino, Bill, and all the others who make it their mission to keep us running so smoothly.