One of the first places I always check for information about Towson history is the newspapers, either the old issues of the Towerlight or the Baltimore Sun. I’m the daughter of journalists, so this is second nature to me.

When I thought about what I would write to commemorate the very first day of Towson’s history, the opening of the doors to the Maryland State Normal School in January of 1866, I turned to the papers.

First of all, you have to remember that this is post-Civil War America. The war had ended only the previous spring in 1865, soon after the assassination of President Lincoln in Ford’s Theater in April. Baltimore had been an occupied city for some of that war and feelings still ran high as the country tried to recover from the turmoil of the previous four years. Andrew Johnson was President, and he was determined to bring the states who had seceded back in line. There were only 35 states in America at that point, with much of the middle of the country held as “territories”. Alaska still belonged to Russia, and Hawaii still held on to its autonomy, if only by its fingernails. The entire world was in a state of flux as the Industrial Age had firmly taken hold and countries vied for goods and power.

Of course, there was no Towerlight back then. The school wouldn’t have a student newspaper until 1921. Instead I had to rely on the digitized Baltimore Sun.

If you haven’t read a 100-year old newspaper, you should one day. The library has access to quite a few historical newspapers.

There were no photos. The layout is so different from what we recognize today as standard newspaper design. Seven long columns of text filled that front page rather than the blocked out stories that continue on succeeding pages. The text itself is faded towards the end of the pages so sometimes it’s hard to read.

I want to share with you some of that front page. Since there aren’t pictures, this blog entry is going to be pretty text heavy, too. I’ll do my best to make it entertaining anyway.

The first column began with “wanted” ads. These are the first three for the day. I typed them as they appear in the paper, caps lock and all.

WANTED — Six WOMEN to Assort Rags, at 34 and 36 LEE ST. None need apply but those who have worked the business.

WANTED — By a Widow Lady, in reduced circumstances, a SITUATION, as Housekeeper, in a Widower’s family. Address H.V.M., Baltimore Post Office

A little further down, a brokerage firms has asked for:

We will pay the highest market prices for all kinds

Until 1862 when the government backed paper money, banks and other institutions printed their own currency. Eventually

The second column of the front page listed various kinds of entertainment that could be found in the city. There were concerts and other performances at places like the Holliday Street Theatre.

“The Peak Family of Bell Ringers appear for five more nights,” boasts one advertisement for the Maryland Institute. “And offer the same attractive performances received with so much favor during the past week.” (Ten nights of bell ringing! The mind whirls.)

The third column devotes a great deal of space to skirmishes between Ireland and England that would lead to the Fenian Rising in 1867.

After a report about “ANOTHER HORRIBLE CASE OF HYDROPHOBIA”, i.e. rabies, an article titled “WIDOWS vs. MAIDENS” appears about the lack of men left in Richmond, Virginia follows. I include it here in its entirety, because it is worth the read. 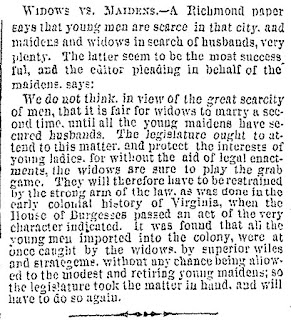 The fourth column of the front page devotes itself to national news: a new railway to be constructed between DC and New York, 2 men executed in Pittsburgh for killing “a German”, “MOVEMENT OF ICE ON THE OHIO RIVER”, Lincoln’s former Attorney General opining that he disagrees with the “Congressional Test Oath“.

The fifth column begins with the headline “THE WITHDRAWAL OF TROOPS FROM THE SOUTH – GEN. GRANT OPPOSED TO THE MEASURE”.

Given that the war had been over for less than a year, Ulysses S. Grant wasn’t convinced that pulling troops from the South was the best idea. This is the gist of Grant’s concern: “For the present, until there is full security for equitably maintaining the rights and safety of all classes of citizens in the States lately in rebellion I would not recommend the withdrawal of the Unites States troops from them. The number of interior garrisons might be reduced, but a movable force sufficient to insure tranquility should be retained.While such a force is retained in the South I doubt the propriety of putting any in the hands of the militia.”

Meanwhile in Chihuahua, Mexico, Benito Jaurez was doing his best to fend off French invasions, as he had been doing for the last five years. Juarez was also president when the French lost at the Battle of Puebla on May 5, 1862 — the original date celebrated by Cinco de Mayo.

Nebraska, meanwhile, organized its state legislature on January 9th. It would not become a state for another year.

The “local” weather, apparently, was reported out of Philadelphia:

“MORE COLD WEATHER Philadelphia, Jan. 14 – Midnight – Since 6pm this evening, the weather has suddenly become much colder here, the mercury falling 10 to 15 degrees.”

The sixth column begins with snappy headlines and Twitter-esque synopses of more events across the nation.

Then it launches into several inches covering the  “Methodist Episcopal Missionary Anniversary”. Across the city, services included addresses from various missionaries about the work they had done throughout the world.

The headline “The Lost Found” starts a tale worthy of Dickens towards the end of the sixth column. A young teen boy was found by police officers with nothing more than the clothes he was wearing. “At the station house, under threat of being sent to the house of refuge, he told that nearly two years ago he had run away from his mother in this city, and had gone with the army, with which he had continued until recently. He was taken to his mother’s house on Goodman alley, near Cross street, by officer Gaines, but she at first failed to recognize him, saying her child was dead. On making himself known, however, the runaway was welcomed as only a mother can welcome a lost child.”

The last column of the front page begins with a list of robberies that occurred in the City, and becomes a veritable smorgasbord of news and notices.

After a discussion about the ice in the harbor shifting, more concerns about boat wrecks and the loss of tobacco they carried, announcements of the meeting of City Council members, reports of deaths and arrests, more notices about the comings and goings of freighters and ocean steamers, at last we come to the report that marks the start of Towson University:

“The State Normal School — This institution, under the control of the State Board of Education, opens this morning. Mr. M.A. Newell is the principal.”

And that’s it. That’s our grand entrance on the world — a two-sentence notice buried under all the life and death and war and recovery and good and bad that was the front page of an American broadsheet in January of 1866.