In 1922 as enrollment at the Maryland State Normal School [MSNS] began to climb, Principal Lida Lee Tall created a new position to help with registering students for classes and staffed it with the first formally trained Registrar, Caroline Pinkney Means.  The next year, Gertrude Carley stepped into the role and acquired an assistant as well.  Carley held the position until 1932 when she was succeeded by Rebecca C. Tansil.

Tansil’s arrival at Towson coincided with a number of important changes and events in the school’s history.  The year before, the school had increased the course of study from two to three years, and in 1934, a four-year curriculum was adopted, leading the way to the awarding of baccalaureate degrees and a name change in 1935 when we became the State Teachers College at Towson [STC].  Just a year later, in 1936, STC was awarded its first accreditation from both the American Association of Teachers Colleges (now the American Association of Colleges for Teacher Education, or AACTE) and the American Council on Education [ACE].

What all this means is that Towson was moving towards professionalizing their teaching and academic programs, and working to meet not just state standards, but national ones for its students and future teachers.

Tansil was a perfect fit for this new passage in Towson’s history.  She arrived with degrees in English and Modern Languages and a minor in College Administration.  While attending the George Peabody College for Teachers (now part of Vanderbilt) in Nashville, Tennessee, she’d written a thesis entitled “The Influence of French Language and Literature on the Prose Works of Edgar Allan Poe”, a synchronous essay for someone who would spend the rest of her life in the suburbs of Baltimore.

But what comes through most in the records about and by Tansil is her boundless energy and zeal for learning and travel.

“When you are dealing with young people, I believe you do a better job if you are learning something new yourself,” Tansil told a Baltimore Sun reporter in 1963.

Tansil spent her first years at Towson learning about its students, its faculty, and the records generated by the school that reflected the work done.  She wrote her doctoral dissertation, published in 1939 and titled “The Contributions of Cumulative Personnel Records to a Teacher-Education Program: As Evidenced by Their Use at the State Teachers College at Towson, Maryland”.  Her work didn’t just earn her a doctorate from Columbia University, it helped underscore how best to support teaching students and new teachers as they worked through the program at STC.

With the outbreak of World War II and, in particular, America’s entry into the war in 1941, Tansil took on the role of liaison between the school community and those former and current students and staff who were serving in the Armed Forces. She began with newsletters and ultimately created a scrapbook, dedicating a page to each service member. Our World War II collection is mostly the result of Tansil’s work.

“As the war news continues” Tansil wrote in the Towerlight in November of 1940 “I find myself considering the peaceful countryside I viewed just five years ago when I drove my Ford car on a five-thousand mile jaunt through Central Europe”.

By 1942, as STC adopted an accelerated program in an effort to meet demands for new teachers, Tansil adapted to the changes this created within the Registrar’s Office.  The program meant that students no longer all moved together in a single cohort, but instead advanced individually by the credits they earned as they went.  And since so many were working at different paces, “To keep account of this checkered career of students there is a chart in the Registrar’s Office where a student can rather accurately determine when he will move from one classification to another and when he can expect to graduate, provided all goes well and he is not sidetracked by army service, by illness, or other ‘unforeseen’ circumstances,” Tansil wrote in the Towerlight.

Tansil was not content, however, to serve just as chief letter writer during the war.  In 1942, Tansil earned a commission in the WAVES, or Women Accepted for Volunteer Emergency Service in the US Navy. Unfortunately, due to some health issues, Tansil was not allowed to start her service until June of 1944.  She was shortly made the head of the WAVE Program at the Navy Supply Depot at Mechanicsburg, Pennsylvania, where she essentially was in charge of three hundred women who lived and worked at the Depot.  “The girls lived in an atmosphere of campus life,” reported the Towerlight on her return to STC in 1946, “And for this excellent program Lieutenant Commander Tansil received a letter of commendation and appreciation from the Chief of Bureau of Supplies and Accounts, and the Secretary of the Navy”.  Tansil had earned the highest rank a woman could have at that time.

Back at STC, Tansil again swung into high gear, helping fully institute the Junior College, a program designed to entice veterans returning from the war to spend their GI Bill money on a two-year college program before transferring to other four-year institutions. 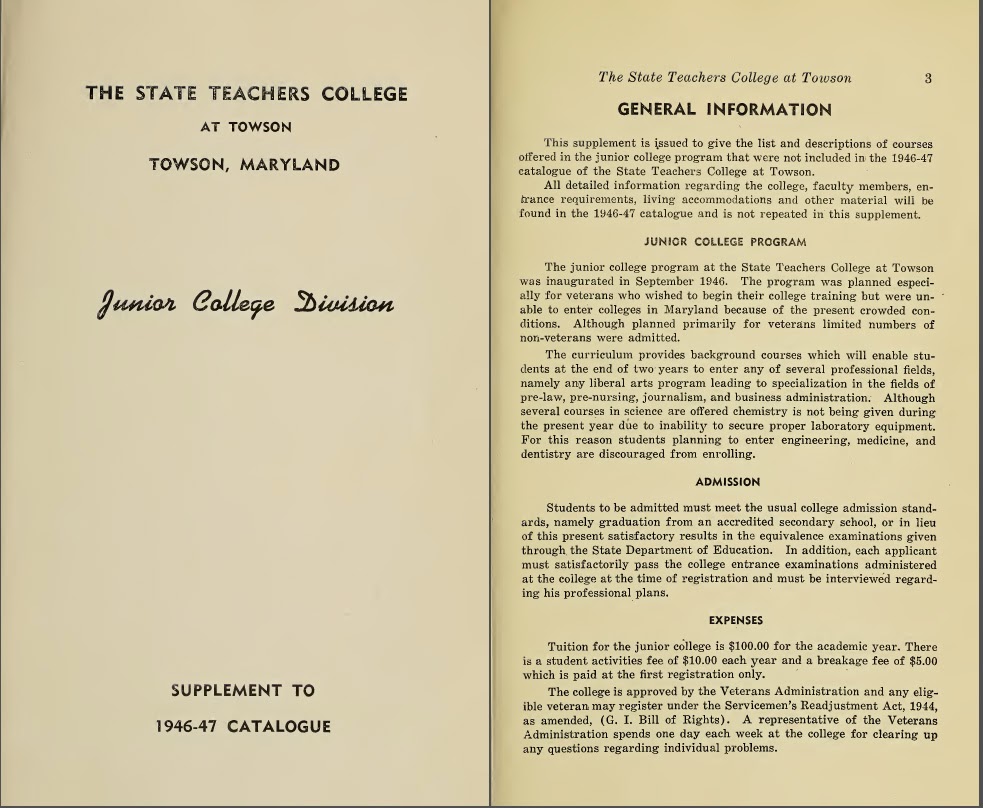 In 1948, she became the Director of Admissions at STC.  And by the 1950s, she joined the Modern Languages Department at STC, teaching Spanish in addition to her duties in the Admissions office. 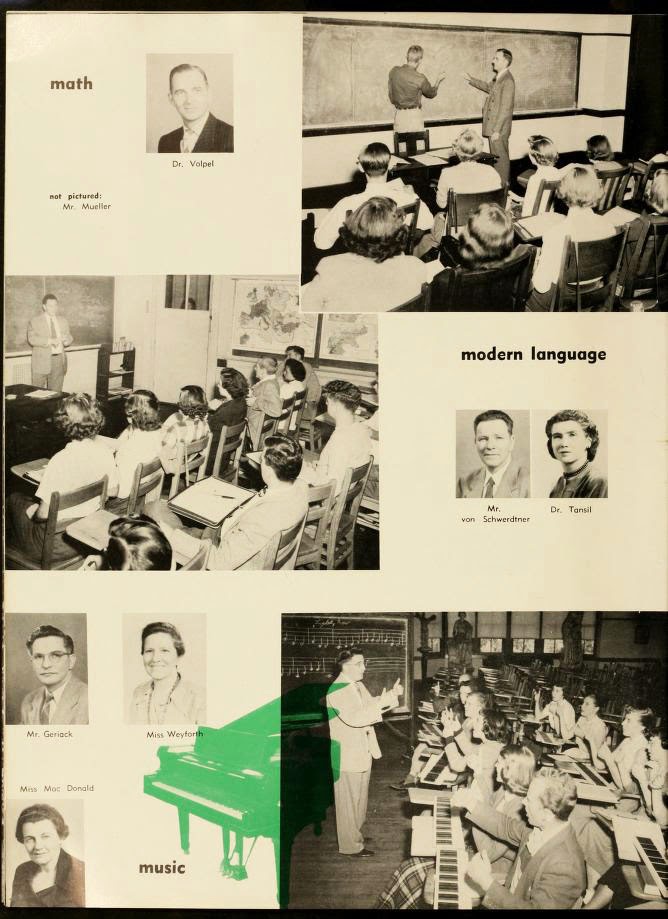 She was known on campus for her charming southern accent, her stylish wardrobe, her love of travel, her many artistic hobbies, but, perhaps most especially, she was known for her love of dogs.

“‘Dog Training’,” wrote Tansil in a 1939 Towerlight article. “To the majority of people means teaching a dog tricks, usually of the acrobatic type found in the vaudeville dog act. . . . A dog trained in obedience is protected from accidents; the well-mannered dog ceases to be an annoyance to the non-dog lover.”

Her work with the Dog Owners’ Training Club led to obedience classes including graduation ceremonies at STC in the 1940s.  “With mortarboard hats perched rakishly on their heads, twenty-five dogs yesterday received diplomas,” reported the Baltimore Sun in June of 1940.

Besides her involvement with the Dog Owners’ Training Club of Maryland, Tansil also worked with the Maryland SPCA, the Poodle Club of America, the Maryland Kennel Club, and the Greenspring Poodle Club.

Tansil continued working at Towson until the school changed from a state teachers college to a liberal arts school in 1963.  That year, the Baltimore Sun ran an article about her, and in it she explains “that she retired from her director’s job so that she would have time for another hobby — traveling.”

Upon her retirement from Towson, she was joined by her sister Blanche, a former home economics professor from the University of Mississippi. They lived together in Parkton, and raised show dogs until Blanche’s death in  1991.

Rebecca Tansil herself died at the age of 96 in April of 1996.  In her obituary in the Baltimore Sun President Hoke Smith is quoted as saying “She played a leadership role during a critical period of change for Towson State as it moved from the normal school to a four-year bachelor of science program, and she was dearly beloved by the many students she helped to influence.”