In the tumult and chaos of the 1960s, Loyola College student Larry Evans came up with a new philanthropy concept: raising
money by breaking records and playing three days of continuous flag football.  The games would be played  by students from different area colleges and the money would go to Santa Claus Anonymous, a Baltimore-area charity that donates money for toys and clothing for needy children.

Loyola College looked to Towson State College as its first partner in the event.  Towson already had a number of flag football intramural teams with names like the Magnificent 7, Untouchables, Hub City, and Gamecocks.  For each marathon, there would be an All-Stars game as well, offering up the best of the schools’ players.

In December of 1966, students from Loyola and Towson State College gathered on the fields at TSC at noon on Friday and played for 72 hours straight.  They raised about $7,000 for Santa Claus Anonymous, and Towson earned bragging rights after scoring 944 points to Loyola’s 580.

Spectators came out to support the players, as did local radio personalities, some news crews, and the Colt’s General Manager, Joe Campanella, threw out the first ball.  Volunteer NCAA referees officiated the game.   Mementos from the game — the game ball, shoes, jerseys, photos from the Towerlight, and even some fragments of the goal posts — were sent to the National Professional Football Hall of Fame in Cleveland, Ohio.  The Towerlight reported that the “Hall of Fame Director, Dick McCann called the marathon a ‘strange and wonderful event’ and congratulated the players on their ‘energies and efforts on behalf of charity.'”

Also during that weekend, 24 people ended up going to the hospital because of various injuries. Some of these may have been doe to the fact that the flags used had to be ripped off the player. For whatever reason, the injuries caused some hesitation on the part of Towson administrators when asked to host the game the next year.  They refused to allow the games to be held on campus, and so organizers moved the festivities to Double Rock Park in Parkville.  It was a good choice as there was a place where concessions could be sold, and it wasn’t in a residential area.

While some complained about the change in venue, TSC President Dr. Hawkins wrote a letter to the editor of the Towerlight, praising all who played for the 74 hours in 1967.

Towson won that second year as well, taking home an empty beer cooler from the National Brewing Company as its “trophy”.  The two schools raised $3000 between concessions and program sales.  And they set the stage for an even bigger game in 1968.  This time, because of insurance bought by anyone who played, Towson agreed to host the games again.

The weekend itself was declared “Santa Claus Anonymous Football Weekend” by Baltimore Mayor Thomas D’Alesandro, who also threw out the first pass at Baltimore City Hall.  This pass began a 9-mile run with the game ball from downtown and along Charles and York Roads to the field at Towson.  It was estimated that 55,000 people attended the 1968 game, but still not much more than $3000 was raised. 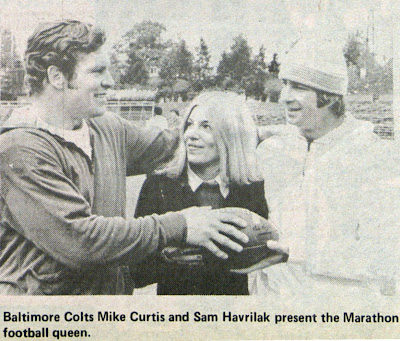 ere also played during the half time.

This is the pattern that the Marathon Football weekends would follow for the next few years, even as organizers wrestled with
finding a good location each year.  Morgan State College hosted in 1969, and then the contest was moved to Herring Run Park.  From 1971 until 1973, the game was played on the Kiwanis Field in Reisterstown before moving back to Herring Run in 1974.

1974 also marked the first year that Towson lost the game, falling finally to Loyola.   While Towson would lose again in 1975 and 1977, for most of the Marathon Football’s history, Towson dominated the other teams.

1975 was the last year the Marathon was held in Herring Run Park.  The event raised $15,000 even as organizers criticized their fellow students for lack of interest in the event.  Towson almost didn’t participate that year because so few volunteers signed up to help with all the events.

In 1976, the committee chose to move the event to the new Rash Field at Baltimore’s Inner Harbor.  It was hoped that doing so would save the organizers money since they wouldn’t have to pay for things like lights, toilet facilities, and clean-up expenses — those things were donated by the city of Baltimore.

The problem was that most of the schools participating were north of the city and not many wanted to venture downtown.  Although plans had been afoot to remodel the Inner Harbor since 1964 and the Science Center opened in 1976, Harborplace had not yet been constructed so there was no Aquarium, shops, or restaurants.  The harbor itself was still just that, a harbor. And tragedy struck in 1976.  A 12-year-old boy watching the games, slipped into the icy waters and drowned.

Even with the problems of attendance and the stigma that the area was unsafe, the Marathon Football games would continue to be at Rash field, run now by an organization called Marathon Football for Charity, Inc.  And Towson continued to participate, although with a lot less fanfare than in years past, until 1983 when the club lost its SGA Charter.

Marathon Football for Santa Claus Anonymous still goes on today, but the area colleges and universities are not the partners they once were.

At a time in history when so many campuses, including Towson’s, were rife with unrest, the Marathon Football games showed the public that college and university students were more than the protestors so often seen in the news.